Our contributors have added 61 photo spots to this Seattle photo guide. Have you discovered an amazing new location in Seattle?

Seattle is built on hills and divided by rivers, a bay, a ship canal and lakes. Its uniqueness lies in its amazingly scenic location along the shores of Elliott Bay with the island studded Puget Sound to the west and Lake Washington to the East. Beyond the Puget Sound, the Olympic Mountains catch the first rays of morning light and the Cascade Mountains, dominated by the massive glacier-covered Mt Rainier, catch the last rays of light at sunset.

Photographing Seattle is a combination of cityscapes with mountains in the background and eye catching architecture. In the recent years, the city has undergone a massive remodel and renewal. As most of the suitable land for building in this very hilly landscape has been developed, smaller buildings are being replaced with sky scraping towers. In 2017, Seattle boasted the largest number of working cranes of any city in the United States. The number was a whopping 62, about 10 more than the next contender. It is therefore expected that some PhotoShop work will be required for any skyline image of Seattle. In the evenings, many of the cranes are lit with colorful lights, making them, almost, an interesting addition to any image. In 2019, the Alaskan Way Viaduct, which runs along the waterfront is scheduled to be removed. The demolition of the two story, elevated, roadway is guaranteed to make a temporary mess, cause massive traffic tangles and change the entire look of the westside of the city.

Parks and outside locations are all tripod friendly. The use of tripods indoors usually brings the building security who will murmur vague words about terrorist threats and 9/11. However, tripod restrictions do not mean that you can not take pictures. Simply, grab your smartphone or set your camera for a high ISO and you will not be hassled. (Photo restrictions are enforced in some museums. When photographing in the city a PC (perspective correction), lens may rapidly become your best friend. If you don't have one, remember to leave plenty of room at the top and bottom of image so that you can correct the odd angles without losing something important when you straighten the buildings.

Seattle is blessed with a maritime climate, which means, with occasional exceptions, the summers are not too hot and the winters are not too cold. The downside of the climate is the rain and endless cloudy days. Winter is a great time to visit, although there is a very short 8 hours of daylight. However, evening views over Elliott Bay from West Seattle are excellent. Spring brings a profusion of colored flowers, starting with the daffodils in late March, tulips in early April and it just gets better from there. Summer weather usually starts in early July and lasts through August or September. Seattle is not known for its fall colors, although some may be found. The rain usually comes back in full force by November. Snow in the city is rare, happening any time from late November through February. 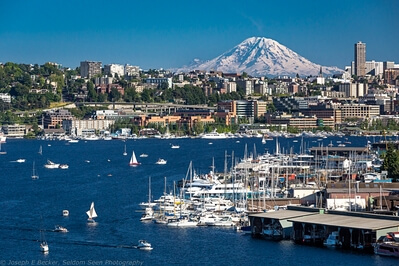 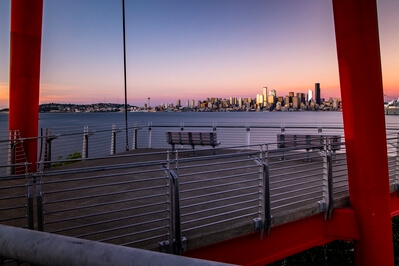 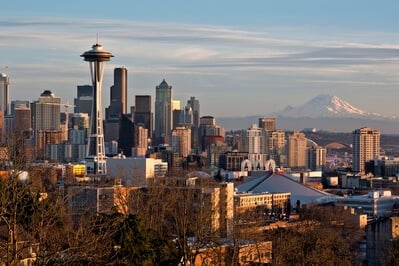 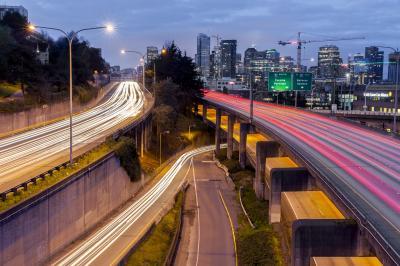 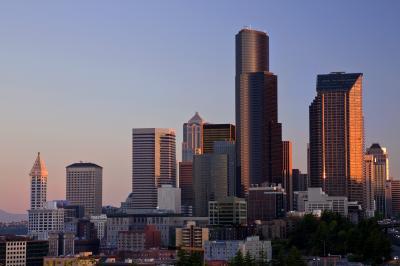 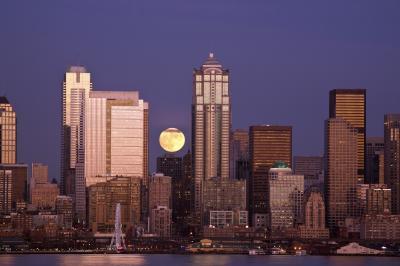 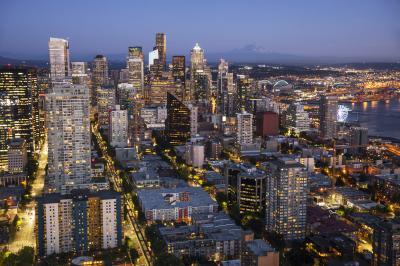 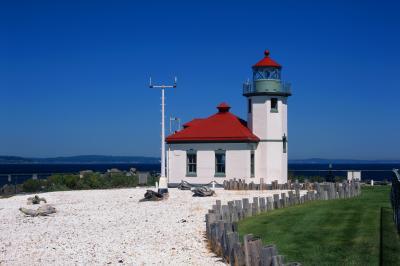 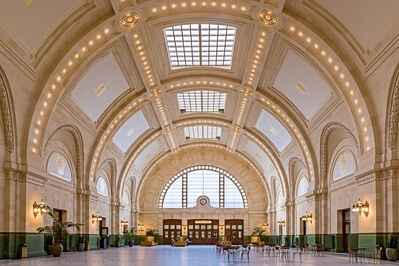 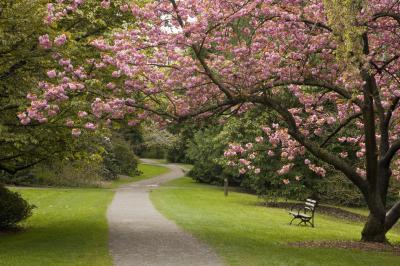 For the number one, overall city view, with the Space Needle, Mt Rainier and Elliott Bay, Kerry Park is a favorite. Arrive early for sunset, and be prepared to join the line of interlinking tripods.

The Seattle Central Library is a must for its modern and very graphic appearance. The Seattle Central Market, (also referred to as the Farmers Market or Pike Place Market), is one of Seattle's best known landmarks with colorful fruit, vegetables and fish vendors. Pier 66 is another, not to be missed, view located right on the waterfront.

Finally, every photographer needs an image or two from the Seattle Center where the Space Needle, International Fountain, Chihuly Glass Museum and Garden and the MoPop are located. In the winter months, be sure to add a trip to West Seattle to the list for views of the highrise towers glowing in the sunset and reflecting on Elliott Bay. Seattle is one of the centers of the tech world. Cell phone coverage, WiFi and all other connection methods are found here.

Visitors are advised to plan for any and all types of weather when they visit Seattle. Raincoats for yourself and umbrellas for the camera are a good idea.

The best way to get around the city is by public transit. Seattle has a real hodgepodge of transports ranging from the new Link light rail system to electric buses, trolleys and a short monorail built in 1962. To negotiate the complicated system, download the Metro app which will help you find the most efficient transport to where you want to go. (In the downtown core area, consider walking to your destination). Locations outside of the core area may be easiest to access by cabs or other ride sharing services.

If you have your own vehicle, watch out for one way streets. Hills are steep, be prepared to stop in unfortunate locations and leave some distance between you and the car ahead. Parking is another problem... it is hard to find and very expensive.

Finally, for the adventurous, there are numerous ride share bicycles located haphazardly around town. The bikes offer inexpensive transport and are great for going downhills. As for returning up town, that is for those who are comfortable with riding up steep hills as most Seattleites are.

For most spots in this guide, directions originate from the Westlake Station, a hub for the Link light rail, buses, and the Monorail.

Seattle is known for its Seafair celebrations which extend from mid-July through early August. Major events include the landing of the Seafair Pirates on Alki Beach in West Seattle, a parade, milk carton races on Green Lake, hydroplane races on Lake Washington and a spectacular air show put on by the Blue Angels.

Chinese New Year is celebrated with dancers and dragons parading through the International District in late January or early February.

May 1st is celebrated with a May Day parade and numerous protest marches. That celebration has a history of ending with a police confrontation on Capitol Hill.

In December, Westlake Park is decorated for the holiday season with lights, a carousel, a menorah and a Christmas tree.

Lastly, Seattle is a very progressive and liberal town; demonstrations and marches, illustrating the right of free speech and protest, are not uncommon. If you want to explore beyond Seattle, we have 1549 photo spots and 11 events that you can visit in United States.

Tom Kirkendall and Vicky Spring are both photographers and authors. Along with a massive file of landscape images, they have written 10 guidebooks for cyclists, cross-country skiers, and hikers.
View profile