Our contributors have added 45 photo spots to this Dartmoor photo guide. Have you discovered an amazing new location in Dartmoor?

An Introduction to Dartmoor

With it’s wild, open moorlands, eerie granite tors, deep river valleys and rich history, Dartmoor National Park is recognised as one of the UK’s finest landscapes. It has been a source of inspiration for poets, writers and artists for centuries and its unique landscape and distinctive geographical features continues to inspire photographers today.

Dartmoor was one of the first areas, in 1951, in England to be assigned National Park Status. It includes the largest area of granite in Britain, with about 625 km2 at the surface and is known for its 160 tors – hills topped with outcrops of bedrock and rounded boulder-like formations.

The highest points on Dartmoor are on the northern moor with High Willhays, 621 m, and Yes Tor at 619 m. On the southern moor Ryder's Hill stands at 515m. The best-known tor on Dartmoor is Haytor.

The high ground of Dartmoor forms the catchment area for many of Devon's rivers. As well as shaping the landscape, these have traditionally provided a source of power for moor industries such as tin mining and quarrying. The moor takes its name from the River Dart, which starts as the East Dart and West Dart and then becomes a single river at Dartmeet. It leaves the moor at Buckfastleigh, flowing through Totnes below where it opens up into a long ria, reaching the sea at Dartmouth.

Only about half of Dartmoor is actually moorland. Equally important for wildlife are the blanket bogs, upland heaths and the oak woodlands which are all of global importance. Dartmoor is a Special Area of Conservation (SAC). Wistman's Wood is one of the old sessile oak woods which contribute to the listing of Dartmoor as a SAC and is possibly a surviving fragment from the earliest Neolithic woodland clearances. It is home to exceptional epiphytic mosses, liverworts and lichens.

Dartmoor contains the largest concentration of Bronze Age remains in the United Kingdom. Numerous prehistoric menhirs (more usually referred to locally as standing stones or longstones), stone circles, kistvaens, cairns and stone rows are to be found on the moor. There are also an estimated 5,000 hut circles still surviving although many have been raided over the centuries by the builders of the traditional dry stone walls. These are the remnants of Bronze Age houses.
Dartmoor is also well known for its myths and legends. It is reputedly the haunt of pixies, a headless horseman, a mysterious pack of "spectral hounds", and a large black dog, among others. During the Great Thunderstorm of 1638, the moorland village of Widecombe-in-the-Moor was even said to have been visited by the Devil.

And finally, remember to look out for all types of wildlife. Dartmoor is especially well known for its wild ponies that roam the land freely. It is also an important habitat for otters, hazel dormice and several nationally rare species of bats, butterflies, such as the Marsh Fritillary, and countless bird species like kestrels, buzzards and Peregrines, to name but a few. 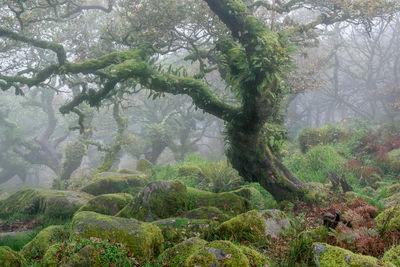 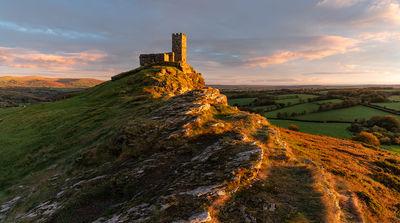 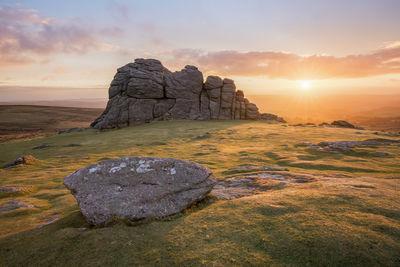 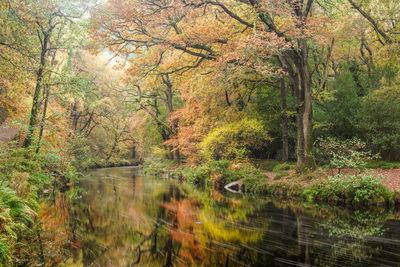 Widecombe in the Moor 3 images 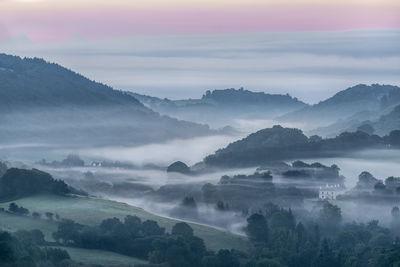 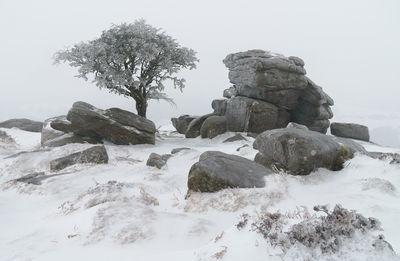 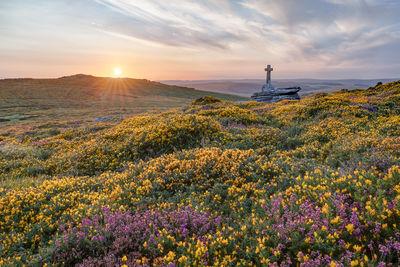 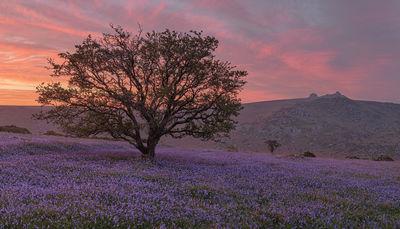 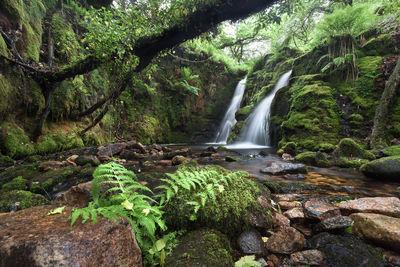 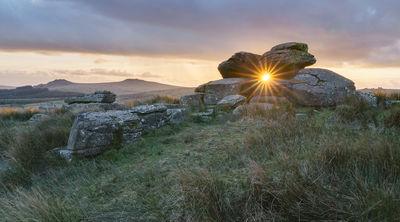 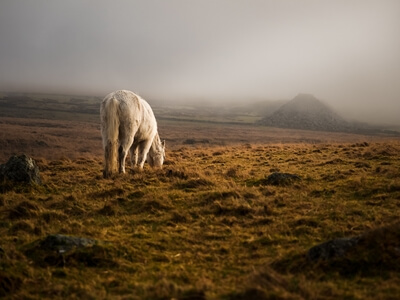 There are many areas I could choose from but I think I would have to include two of the three stunted oak copses, Whistman’s Wood or Black-a-tor Copse for their uniqueness and importance of what Dartmoor used to look like before man had it’s influence. The eerie moss covered, boulder laden wood, is enhanced when the moor is blanketed by fog.

Another location would be Sharpitor, on the south west side of the moor, and the views on a spring sunset are wide and expansive and include Burrator and Sheep’s Tor.
Wild Tor is my favourite. The relatively short barely half-day hike, the lack of many visitors, makes it an ideal getaway. The view to The Mendips, on a clear day, are great and makes for a great sunrise location for a wild camp.

The last, and most off the beaten track, would have to be the most remote Tor, Fur Tor. It is a fairly long walk, and in the winter can be pretty arduous in the wet bogs, but with it remoteness and relative freedom from human interference and noise, it can be a great place to camp out. It is a great looking tor and you can get some good loft views of the surrounding moorland. Dartmoor differs from some other National Parks in England and Wales, in that since the Dartmoor Commons Act 1985 much of it has been designated as 'Access Land', which, although it remains privately owned, has no restrictions on where walkers can roam. In addition to this Access Land, there are about 730 km (450 mi) of public rights of way on Dartmoor, and many kilometres of permitted footpaths and bridleways where the owner allows access.

Dartmoor has been used for military training since the early 1800s. There are three training ranges on the north moor (Okehampton, Merrivale and Willsworthy and dry training areas on the south moor (Cramber Tor, Ringmoor and Sheeps Tor). Much of the land upon which the MOD trains is privately owned and training is undertaken under license from landowners including the Duchy of Cornwall. Red warning flags are present when firing is taking place. At other times, members of the public are allowed access. Blank rounds may also be used, but the MoD does not notify the public of this in advance. Be sure to check firing times before you visit.

A useful start point for your visit could be one of the three visitor centres at Haytor, Princetown or Postbridge where you will find ample parking and useful maps and information.

Whilst the weather can be a challenge, there is something for the photographer year-round on Dartmoor. The weather does not always play ball and you can often walk miles to a location just for the sun to disappear behind a cloud bank, never to be seen again. But very often light, clouds and weather conditions come together for the perfect shot! Very often stormy conditions can produce the best light and most dramatic pictures. Weather can be changeable on Dartmoor so make sure you are properly attired for the outdoors: a waterproof jacket, warm layers of clothing, sturdy boots and it’s a good idea to bring an Ordnance Survey map of Dartmoor (OL28). Ten Tors Challenge takes place annually on the weekend following the May bank holiday. Around 2400 young people (aged between 14 and 19) walk for distances of 56, 72 or 88 km between ten tors on many differing routes. I used to, as a kid, take photographs of wildlife with my old Pentax 35mm. A long break from photography and a few grey hairs later I have re-acquired my passion, enhanced living on the very edge of Dartmoor, particularly for landscapes and nature.
View profile