Top places to photograph in London in 2022

These are the very best London Instagram spots, curated by the PhotoHound team. If you've got limited time here, these are the must-see locations to shoot while you're in London! 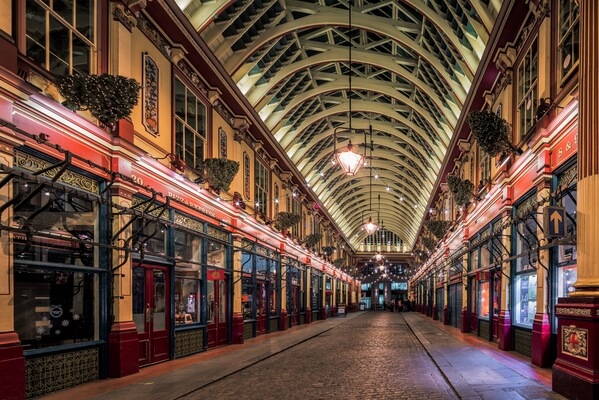 Imagine what a shopping centre would look like if it was built in Victorian times. If you imagined cobblestone streets, high vaulted ceilings and a large amount of ornamental detail, you’ll have a good picture of the Leadenhall Market. It is one of the oldest markets in London, dating from the 14th century. 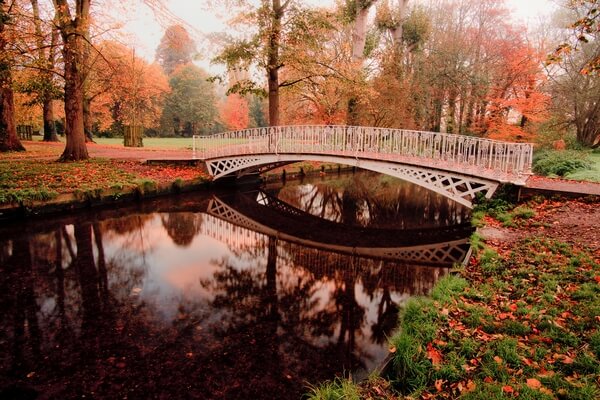 Morden Hall Park is a National Trust park located on the banks of the River Wandle in Morden, south London. It covers over 50 hectares of parkland with the River Wandle meandering through it spanned by numerous foot bridges. A number of historic buildings are located in the park, including the Hall itself and preserved watermills where tobacco was once ground into snuff. 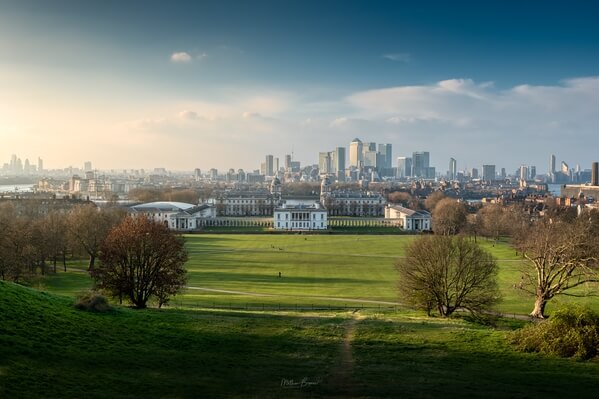 This location is one of the highest natural points of elevation within the city limits. It offers excellent views of the classical Greenwich Naval Colleges (designed by Christopher Wren who also designed St Paul’s Cathedral) with the modern Canary Wharf in the background – one of the finest examples of architectural contrast in the city. To the west (pictured) is a view of the City of London with its numerous skyscrapers. The site is also significant as the point of origin of the Greenwich Meridian Line.

The British Museum is the world's most popular museum according to visitor numbers. It holds treasures like the Rosetta Stone, one of the Easter Island moais, and approximately 8 million works dedicated to human history, art and culture. At any point only a fraction of the museum’s collection is on display. 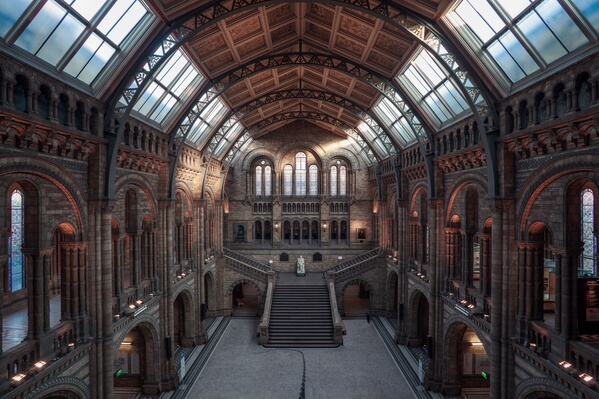 The British Museum may be the most visited museum, but in my opinion, the Natural History Museum is the most iconic of the London museums. As the name suggests, it's a natural history museum, so think dinosaur bones and stuffed animals. The main attraction is the building that houses this collection. 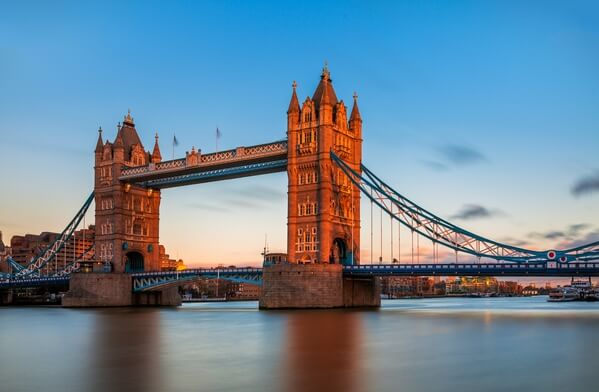 Tower Bridge is perhaps the most iconic and photographed attraction in all of the UK. This is a must see spot for just about everyone who visits London. Opened in 1894, the “bascule” bridges (which mean see-saw in French) are lifted to this day on a schedule to allow boats and barges to pass.

Learn more about View of Tower Bridge from South Bank 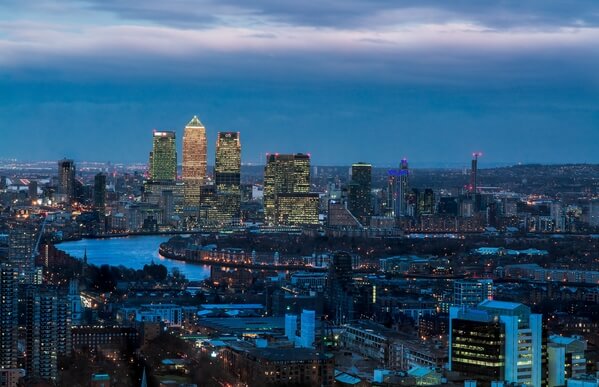 The Sky Garden provides one of the only high views over London that does not require an entry fee. It provides almost a 360 degree view of London and as it is located in the City of London, the views are spectacular. 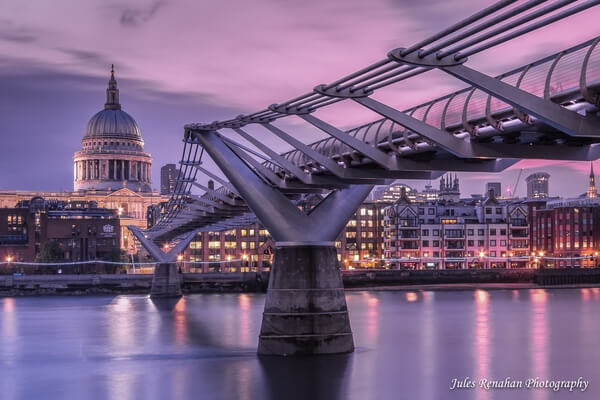 This is a great spot on the Southbank, from which to capture St Paul's Cathedral , one of the most iconic buildings in the city. For more than 1,400 years, a Cathedral dedicated to St Paul has stood at the highest point in the City and this current masterpiece by Sir Christopher Wren was built between 1675 and 1710. Stand left of Millennium Bridge in front of Tate Modern to capture this classic view. At blue hour the bridge is illuminated as is the dome of the cathedral and buildings on the opposite bank.
Learn more about View of St Paul's Cathedral from Millennium Bridge 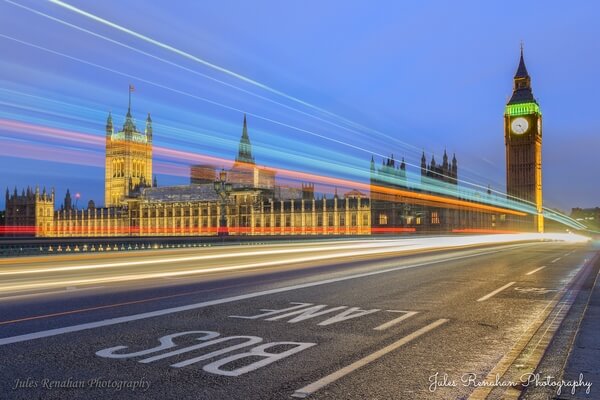 A great spot from which to capture buses and trailing lights as they cross Westminster bridge with the Houses of Parliament and Big Ben in the background. The bridge itself is an interesting subject whose vintage lamps can be used as a foreground interest to shoot nearby landmarks such as Big Ben or the London Eye.
Learn more about Westminster Bridge 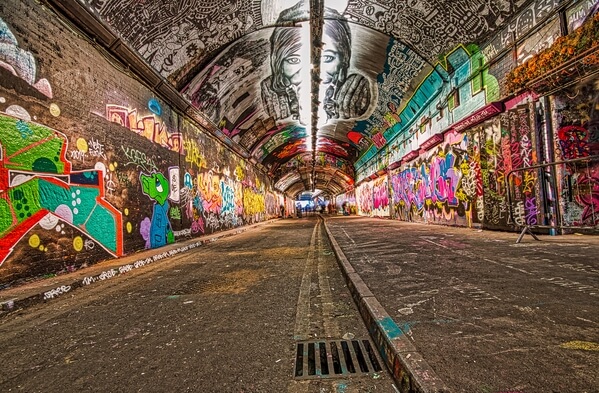 A 300-metre street which runs below Waterloo station where graffiti - usually against the law - is not just tolerated but encouraged as a safe space for street artists to display their art.
Learn more about Leake Street Graffiti Tunnel 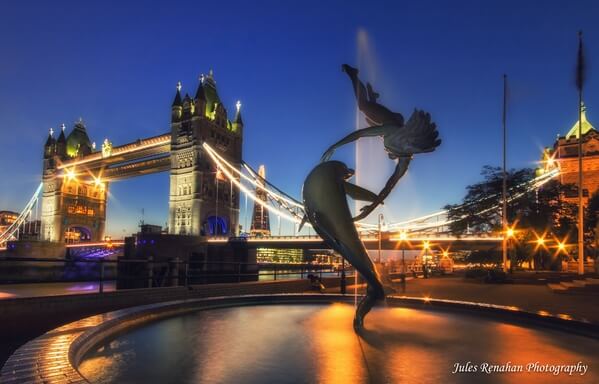 Girl with a Dolphin Fountain

The Girl With A Dolphin sculpture was created by David Wynne in 1973 and is located at St Katherine's Pier with Tower Bridge as it's backdrop.
Learn more about Girl with a Dolphin Fountain

One of the best viewpoints in all of London. Primrose Hill rises 65 metres above the city to the north, offering wonderful views at all times of day.
Learn more about Primrose Hill

A stunning classical building housing a renowned art collection, but the star of the show is Inigo Jones’ architectural masterpiece, the Tulip Stairs. A world famous spiral staircase.
Learn more about Queen's House 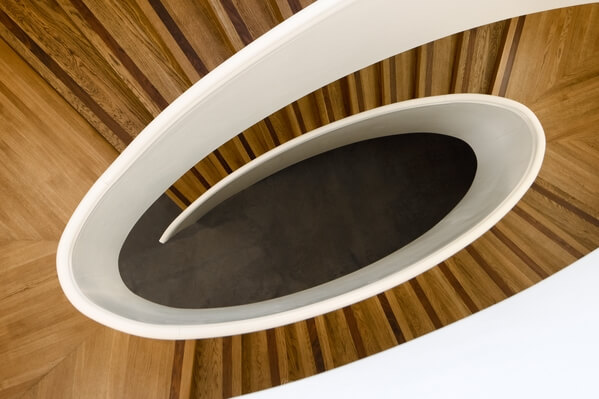 One of a finest locations for architecture photography in all of London. This gallery has several photogenic staircases, a one-of-a-kind cafe, in addition to art installations. The best part is that it's completely free.
Learn more about Newport Street Gallery 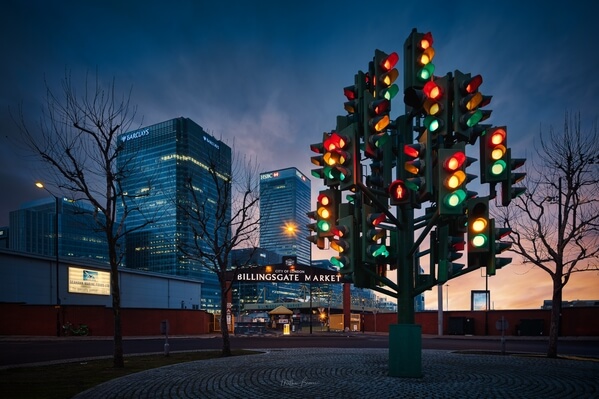 One of London's more bizarre sights - a tree made of traffic lights, by French sculptor Pierre Vivant.
Learn more about Traffic Light Tree 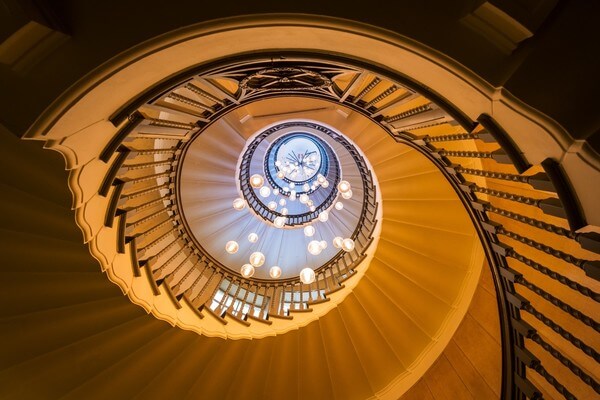 Heal's is a famous British furniture store, that was established in the early 19th century.
Learn more about Heal's Spiral Staircase 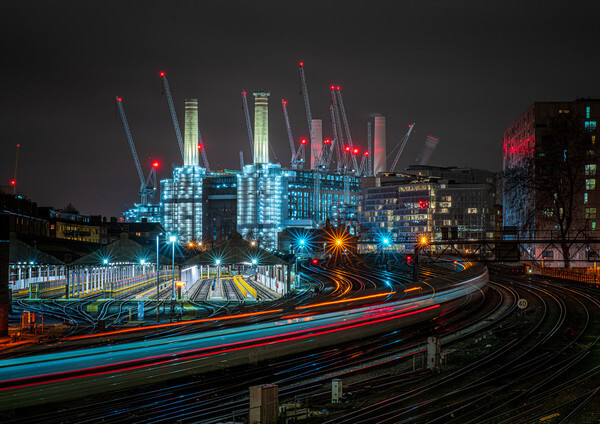 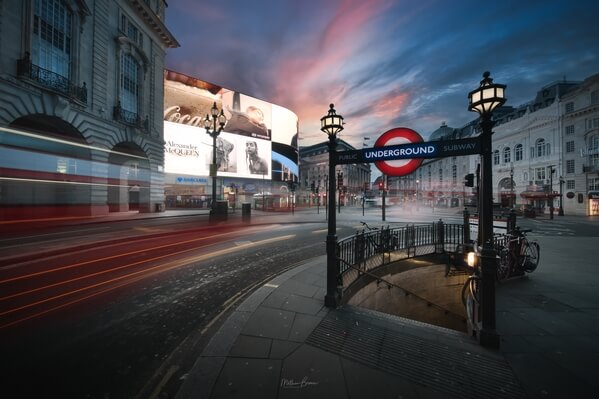 One of London's most popular tourist destinations and instantly recognisable. It is the junction of several of central London's major tourist streets and is at the southernmost end of Regent Street, renowned for high end shopping. The iconic advertising board have been upgraded several times over the years, most recently a giant, curved LED billboard. The statue of Eros is a popular meeting point and street performers are often found here wowing tourists.
Learn more about Piccadilly Circus

We hope you enjoy photographing these great London Instagram locations. We love seeing your images of the most Instagrammable places in London, so make sure to share your images on PhotoHound and tag us on Instagram @photohound and hashtag #photohound for a chance to be featured.