Top places to photograph in Rome in 2022

These are the very best Rome Instagram spots, curated by the PhotoHound team. If you've got limited time here, these are the must-see locations to shoot while you're in Rome!

This spot offers a spectacular view of St. Peter’s Basilica from the Tiber. Unlike all the other Papal Major Basilicas, it is wholly within the territory, and thus the sovereign jurisdiction, of the Vatican City State, and not that of Italy. It is the most prominent building in the Vatican City, and its dome is a dominant feature of the skyline of Rome. Probably the largest church in Christendom, one may be surprised to learn that St. Peter is neither the Pope's official seat nor first in rank among the Major Basilicas of Rome. This honor is held by the Pope's cathedral, the Archbasilica of St. John Lateran which is the mother church of all churches in communion with the Catholic Church.
Learn more about St. Peter's View

This is one of the most famous landmarks of the Eternal City. At the center of the square is the Barcaccia fountain, dated 1629, by Pietro Bernini (father of the celebrated Gian Lorenzo, who finished its construction). It was built to commemorate the Tiber flood of 1598 and its semi-submerged boat shape was a device to conceal the technical problem of poor water pressure. At the center of the south-east triangle of the square rises the column of the Immaculate Conception, on top of which is placed the bronze statue of the Virgin Mary; but it is the central staircase that makes the square one of the most spectacular scenes in the city. It was built by Francesco De Sanctis, in 1723-26, at the behest of Innocent XIII, and gave a definitive arrangement to the considerable difference in level between the square and the Trinità dei Monti church.
Learn more about Piazza di Spagna 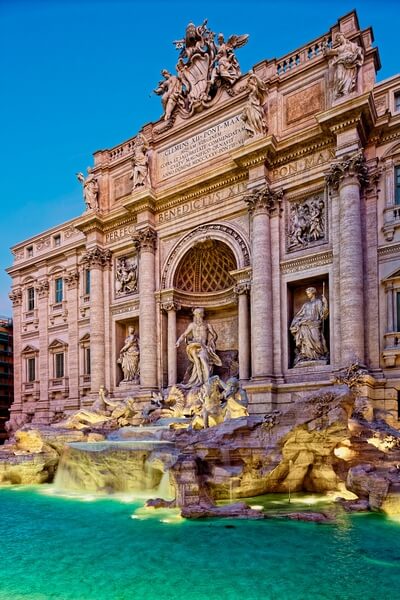 The Trevi Fountain is the biggest, most scenic and most famous among the fountains of Rome and constitutes the terminal of the Acqua Vergine, the aqueduct that Marco Vipsanio Agrippa built in 19 BC. A well-known tradition says that whoever throws a coin in the fountain, while turning their back, will return to Rome; because of the crowds visiting daily, at any given time the coins in the fountain amount to a little fortune and it is strictly forbidden to enter the basin. The accumulated coins amount to in excess of 1 million Euros per year! Every day the diocesan Caritas needs an hour to collect them from the fountain, before distributing the funds to the needy. The operation takes place at 8 am, using pumps while the monument is temporarily off-limits to the public. The coins are then brought to a laboratory, where they are washed; finally the various currencies are separated. Thanks to some companies it is also possible to change coins and not just banknotes and so all currencies are converted into Euros.
Learn more about Fontana di Trevi 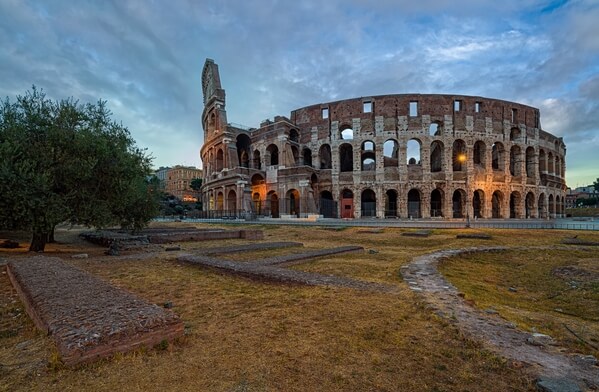 This is the classic spot from which to shoot the Colosseum (Colosseo). Also known as Amphitheatrum Flavium, it is the largest amphitheater in the world and could contain a number of spectators - estimated between 50000 and 75000. It is the most impressive remaining monument of ancient Rome and is known throughout the world as a symbol of the Eternal City - one of the great symbols of Italy. In ancient times it was used for gladiatorial shows and other public events (hunting shows, reenactments of famous battles, and dramas based on classical mythology). No longer in use after the sixth century, the huge structure was variously reused over the centuries, even as a quarry of material. 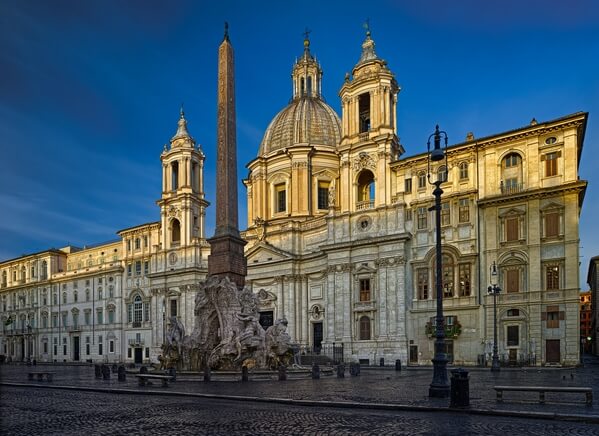 Piazza Navona is built over the remains of the ancient Stadio di Domiziano, and during the late 15th century was transformed into an impressive example of Baroque Roman architecture. It is a heavily visited landmark and sports no less than three noteworthy fountains (North to South: “Fontana del Nettuno”, “Fontana dei Fiumi” and “Fontana del Moro”) and the imposing Sant’Agnese in Agone church.
Learn more about Piazza Navona 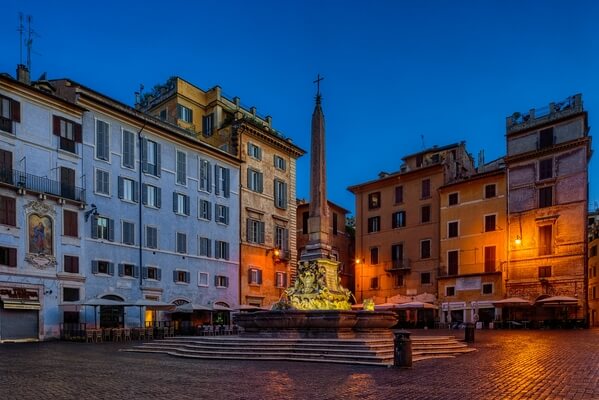 The Pantheon is one of the best preserved monuments of the Eternal City, and is well worth visiting inside (2€ entrance fee). Plan to get inside around noon on a clear day, since the sun rays entering the Oculus (Hole) in the roof will put on a nice show. The monument is normally very crowded, as is the facing Piazza della Rotonda where Romans and tourists alike lounge throughout the day and until late at night.
Learn more about Pantheon 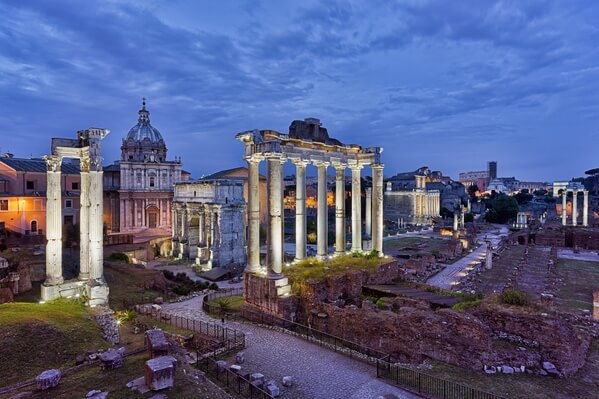 The Foro Romano is one of the highlights of a visit to Rome, but it is only accessible outside the golden hours, while you can reach this location all day long. It offers an almost aerial view directly above the most spectacular area of the excavations, with the impressive Tempio di Saturno and Arco di Settimio Severo in the foreground. The view extends to the horizon, where it is blocked by the Colosseo.
Learn more about Foro Romano Overlook 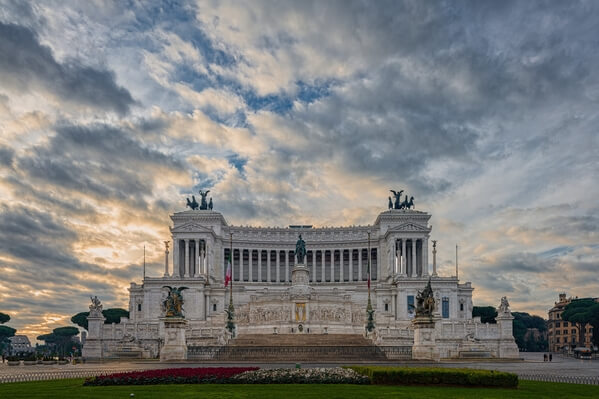 In my opinion the square itself is not very photogenic, but offers a grand view of the Altare della Patria, also known as the Monumento Nazionale a Vittorio Emanuele II or Vittoriano. This imposing monument is a mix of several architectural styles, and features stairways, Corinthian columns, fountains, an equestrian sculpture of Vittorio Emanuele II and two statues of the goddess Victoria riding on quadrigas. The monument holds the Tomb of the Unknown Soldier, with an eternal flame. It is possible to buy a ticket for the panoramic lift, allowing visitors to ride up to the roof for 360-degree views of Rome (no tripods allowed).
Learn more about Altare della Patria 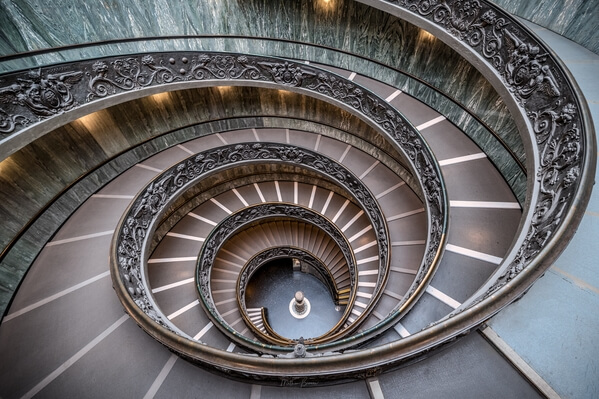 A modern double helix staircase which forms the exit of the Vatican Museums and is considered one of the world's architectural icons.
Learn more about Bramante Staircase 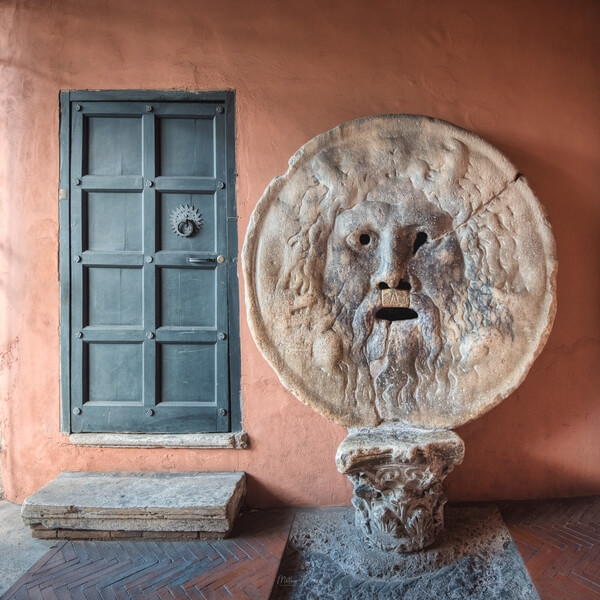 A marble mask which attracts visitors who stick their hand in the mouth.
Learn more about Bocca della Verita (The Mouth Of Truth)

We hope you enjoy photographing these great Rome Instagram locations. We love seeing your images of the most Instagrammable places in Rome, so make sure to share your images on PhotoHound and tag us on Instagram @photohound and hashtag #photohound for a chance to be featured.