Residing next to a national park has its advantages. Within a few minutes, I can be exploring and photographing in one of America's most beautiful and spacious national parks and I have done so with much gusto for nearly 30 years.

Glacier National Park was created in 1910 to preserve over one million acres of unspoiled wilderness. More than 730 miles of hiking trails provide access to soaring peaks, mountain meadows, verdant tracts of forest and fish-filled clear lakes.

There are two main access points to the park. Highway 2 which skirts the park’s southern border and has the lowest crossing in the Rocky Mountains (5,213 feet) at Marias Pass. The scenic highway provides access to the open prairie landscape near East Glacier and the only east to west access of the park until summer. Going to the Sun Road is an enthralling engineering marvel that bisects the heart of the park in its 52-mile length. The narrow roadway hugs mountainsides while it twists and turns to the Continental Divide at 6,646 feet at Logan Pass. Many visitors to the park come specifically just to drive on the famed road.

Traveling the epic Going to the Sun Road is a treat in itself and there are numerous pullout roads that offer stunning views, wildflowers, waterfalls, and possible wildlife sightings.

There is much history in the over 100 years that the region has existed as a national park. The red jammer buses, historic ranger stations and lodges just add to the charm of place called the “Backbone of the Earth” by the local Blackfeet Native Americans who have called this home for centuries.

Glacier National Park has two distinct regions as the Rocky Mountain divide does more than guide its meltwater and rainfall to either the Pacific, Atlantic or Arctic Oceans. It exposes two distinct landscapes; the western side of the park is heavily forested while the eastern flanks are more open country with a mix of prairie, foothills and mountains.

I prefer to be on the park's eastern side. When the clouds hanging in the mountains are exposed to the sun’s first rays, they often result in colorful sunrises with variations of reds, oranges and yellows. Hopefully, the wind is calm as terrific reflections in lakes such as Swiftcurrent, St Mary, and Two Medicine can yield stunning images.

Wildflower season usually starts by the end of June, and the peak of the blooms follows the change in elevation. I like to begin photographing the prairie wildflowers in the Many Glacier and St Mary valleys in early July, and then head up to Logan Pass in August to follow the bloom up higher. There are great wildflower opportunities right along the boardwalk on the route to the Hidden Lake overlook. (Please remember to stay on the boardwalk and not trample the fragile alpine environment.) The iconic bloom of beargrass is cyclical, a good year is about every seven years as the white puffy stalks add a sense of magic to the land.

Best bets for wildlife include the easy hike to Fishercap Lake in the Many Glacier Valley where moose are often spotted feeding in the shallow lake; the Logan Pass area that has healthy populations of bighorn sheep, mountain goats and large mule deer; while bears can often be seen along the roadways in the Many Glacier Valley. Be sure to use caution, do not approach wildlife, and carry bear spray.

Yes, there is something special exploring such a magnificent landscape where glaciers have carved out stunning valleys that are still home to wild grizzly bears. Glacier National Park is a place to be both humbled and inspired by. 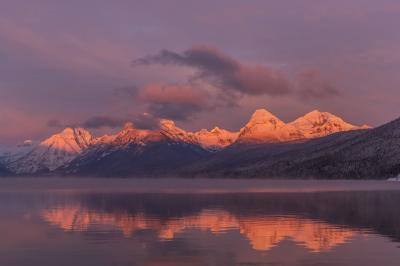 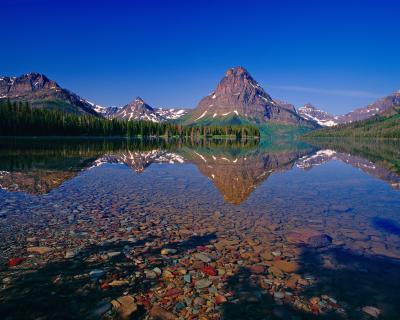 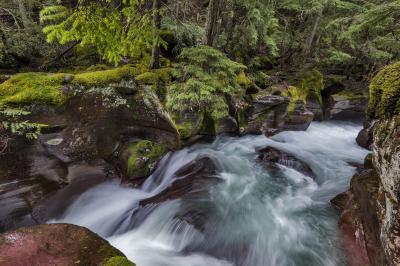 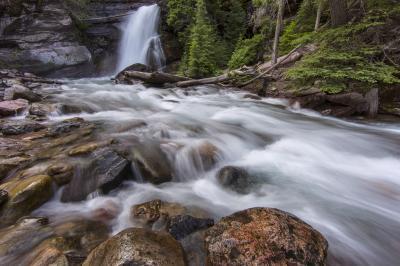 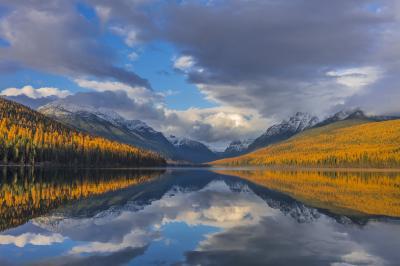 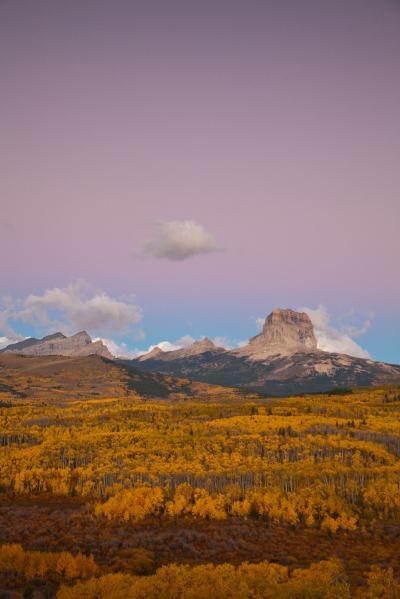 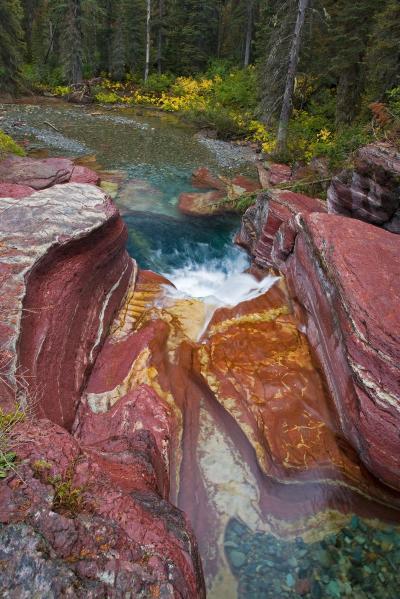 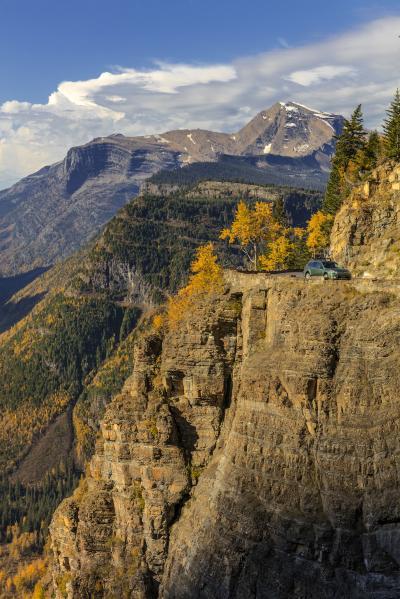 Going to the Sun Road 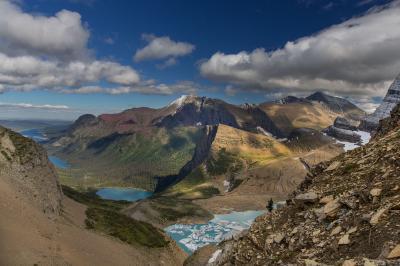 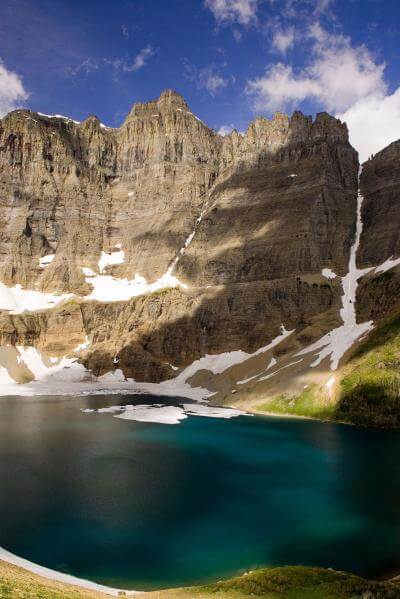 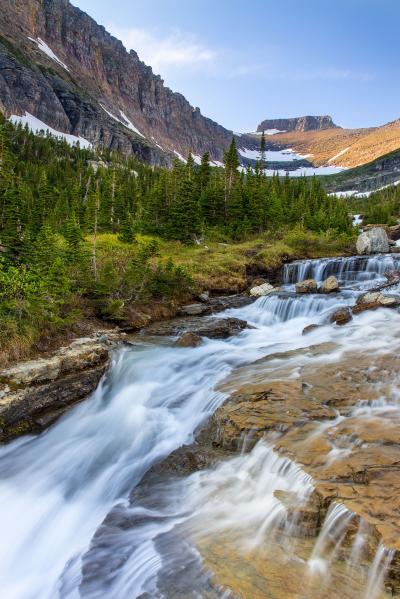 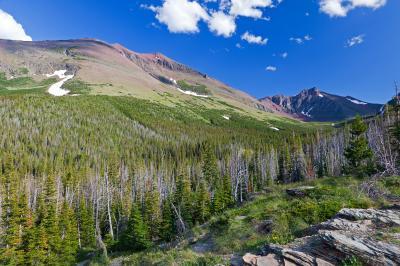 On the park’s western side, I prefer the sunset lighting on Bowman Lake in the remote northwestern corner of the park. The rough road may deter some, but to me camping, paddling my kayak and capturing a calm reflection of the lake are some of my favorite Glacier experiences.

I love hiking and exploring at Logan Pass when the summer wildflowers are in full bloom in July and August. The area is so alive with life. There is really no place on earth quite like it! I feel such reverence for the place that I even named my son, Logan, after the pass.

In winter, I relish coming to the shore of Lake McDonald late in the afternoon near sunset, which can be 4pm in January. It is so quiet at that time of year, you can sometimes hear the ice cracking on the lake as it forms. It can be well below zero, but if the sun is out, it not only warms my body, but my soul as well. I search out a scenic compositions or ice patterns to create new images and put the cap to another day in paradise. Going to the Sun Road

Glacier National Park has two airports within several hours driving time or less. Kalispell International Airport is about a 30 minute drive from the park’s western entrance at West Glacier while Great Falls International Airport is about a 2.5 hour drive to East Glacier, the gateway town to the parks eastern attractions. AMTRAK passenger trains on the Empire Builder route make daily stops at East Glacier, Essex, West Glacier and nearby Whitefish.

The famed Going to the Sun Road is generally open all the way across it's 52-mile stretch from late June into October, depending on weather conditions and road construction projects. The road is only open to Rising Sun Campground in the east and Lake McDonald Lodge on the west during winter, and the side valley roads are closed until plowed out in spring. You can travel across Highway 2 on the park’s southern border to cross the Continental Divide year-round. In spring, the road crews begin plowing the massive amount of snow from the road and it opens incrementally according to the progress being made by the crews. Later in spring, the road on the west side is open to automobiles as far as Avalanche Creek (16 miles from West Glacier) where hikers and bicyclists-only have further access up the road for several months.

When the road fully opens in late June or early July, it is as if the floodgates open, and hordes of visitors descend on the narrow arteries of the park. I highly recommend booking lodging or campgrounds as early as possible as the “ No Vacancy” signs dominate in July and August. Even getting a parking space is an ordeal after 8 am at popular trailheads and Logan Pass.

There is a free shuttle service located near Apgar Village that transports hikers between trailheads. The historic red jammer buses are fun to travel in and photogenic themselves. All of the park’s major lakes have boat tours that are fun and lead to some unique perspectives.

Take caution while visiting this national park. People die every year from drownings, falls, automobile accidents and getting lost. Wear good, sturdy hiking boots, and pack clothing for sudden changes in the weather. Carry bear spray, make noise, and be aware when hiking and know what to do in case of a wildlife encounter. Hint- don't run! It's not just bears as there are also mountain lions and wolves, though rarely seen. Even moose can be quite dangerous and I have sometimes witnessed visitors approaching these wild animals much too closely.

Being a photographer has its advantages as traveling the road early or late in the day before the majority of visitors arrive is still pleasant and uncrowded. Employ that strategy when exploring with your camera as the park’s magic often reveals itself at 5:30am.

I suggest lacing up the hiking boots and seeing some of the park's backcountry where you can get away from the summer crowds and really get the true essence of Glacier. There are no events specifically relevant to photography, but you can check the National Park Service calendar here: If you want to explore beyond Glacier National Park, we have 1368 photo spots and 8 events that you can visit in United States. 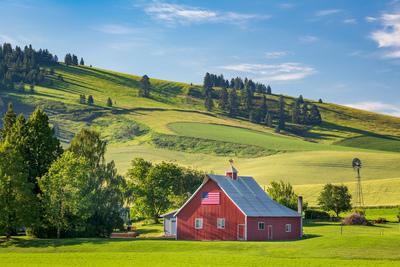 Chuck Haney is a professional freelance photographer based in Whitefish, Montana. He travels extensively across North America in pursuit of the finest and most intriguing images. His provocative use of natural light in landscape, wildlife and outdoor sports images have drawn national acclaim.
View profile