The Coyote Buttes Wilderness is a protected area, subject to a permit system, located in the northeastern tip of the Arizona Strip and encompassing some of the Paria River drainage and the Cockscomb fault. Most of this area is included inside Vermilion Cliffs National Monument.

The Coyote Buttes Wilderness is jointly administered by the Kanab Field Office of the BLM and the Vermilion Cliffs National Monument (part of the Arizona Strip Field Office in St. George, UT). Concerns about widespread ecological damage to this pristine area led to the establishment of a quota system in 1997, restricting visitation to a total of twenty permits a day for Coyote Buttes North.

Permits are issued for daytime use only and overnight camping is forbidden within the Wilderness area. Camping is permitted on the west side of House Rock Valley Road, in particular at the Stateline Campground.

Within Coyote Buttes North lies the crown jewel of the area: the Wave. It is a magical place where the colorful sandstone gives itself to mind-boggling psychedelic gyrations.

"Discovered" in some coffee-table books, videos, and magazines in the early nineties and kept away from the limelight for a few years, the world-famous Wave is the crown jewel of the Coyote Buttes that every landscape photographer dreams to shoot. However, access is by permit only and the twenty daily permits are hard to get. 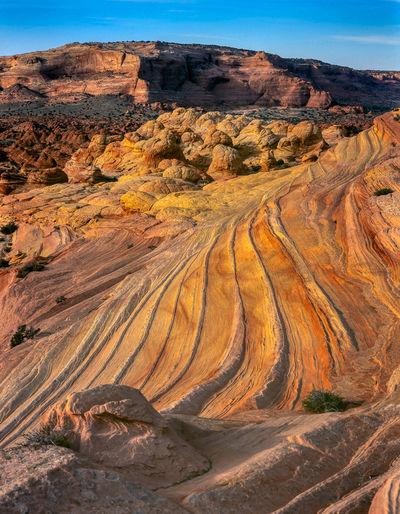 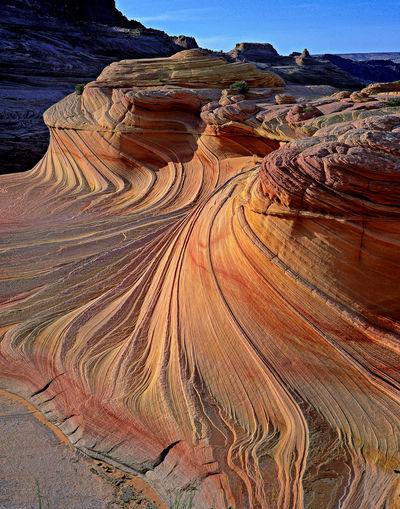 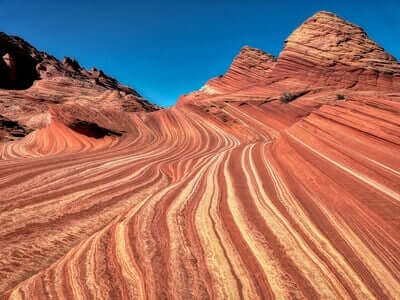 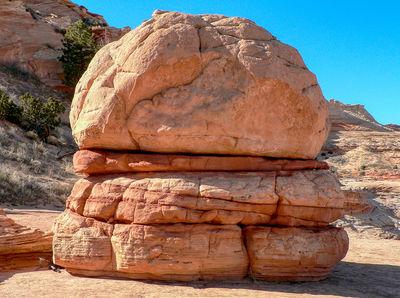 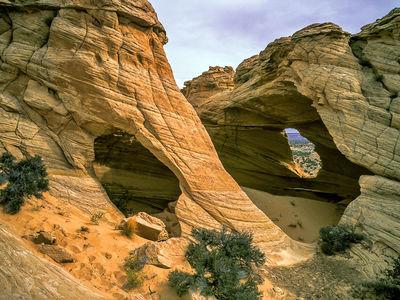 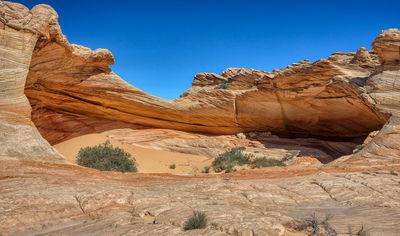 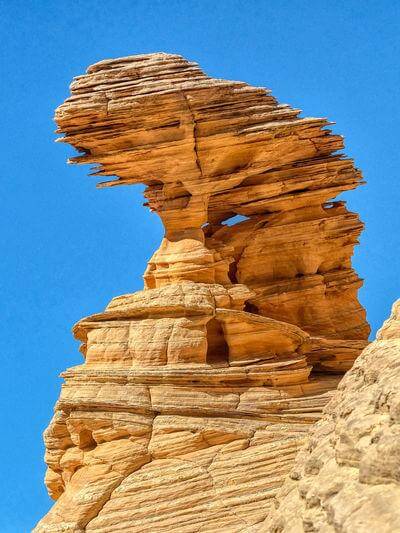 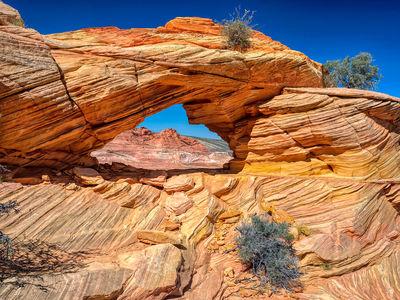 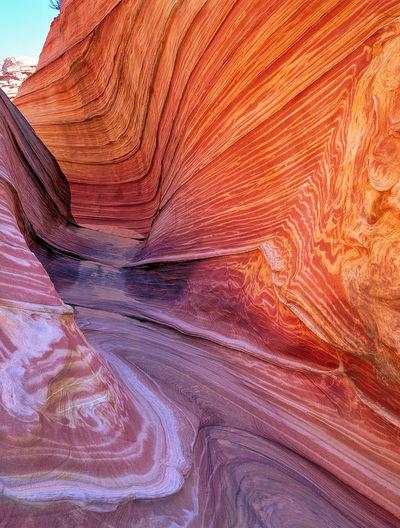 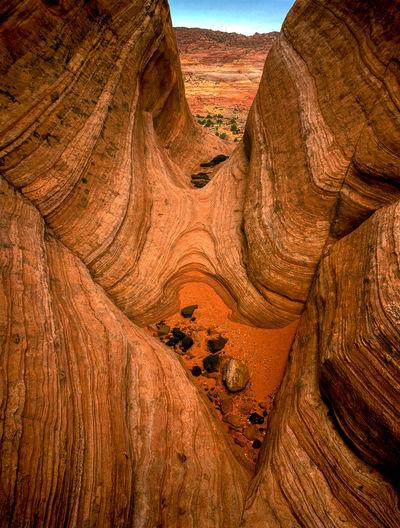 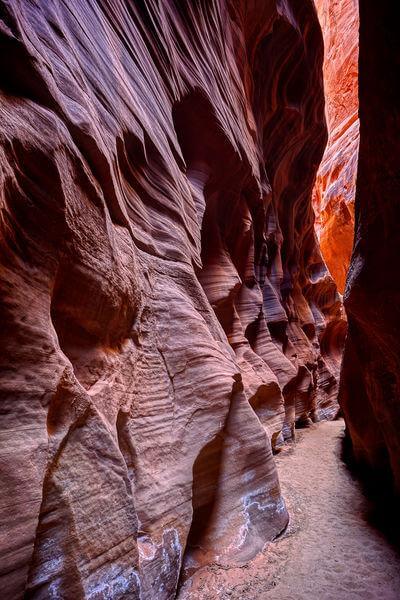 To plan your visit to the Wave, you need to reserve your permit online well in advance. For detailed information on how the permit system works, see https://www.blm.gov/programs/recreation/permits-and-passes/lotteries-and-permit-systems/arizona/coyote-buttes

As of this writing, you can enter the lottery four months in advance to obtain a permit for some of the ten slots available online each day (as an example, you must apply during January to visit Coyote Buttes North in May). For a $5 fee, you can apply for up to three entry dates for any given month. Unfortunately, thousands of people from all over the world apply to the lottery, so your chances to win a permit are no more than a few percentage points. If you are planning a trip less than four months in advance, begin by checking the calendar on the permit page to see if some slots are still available. This very rare case is more likely to happen during the winter months.

If you couldn’t reserve a date on the Internet and are vacationing in the area, there is still a glimmer of hope: you can try to obtain a walk-in permit at the Grand Staircase-Escalante National Monument Visitor Center in Kanab. The total number of permits varies by group size, but there is a total of twenty slots per day, ten permits being issued online as previously described and the other ten being issued as walk-in permits. Travelling as a group—a maximum of six per group is allowed—further diminishes your chances of finding the date of your choice. Be ready to make some major scheduling concessions. Walk-in permits are issued seven days a week from March 15 to November 15. In the winter time, walk-in permits are issued 5 days a week and permits for the weekend and coming Monday are all issued on Friday. The drawing for the next day's ten permits starts at 9 a.m. Utah time. Be sure to arrive at least fifteen minutes before to fill in your application. There is no drawing if ten or less people are seeking next-day permits. Also, some permits could be available for same-day use in case all ten permits were not issued the previous day. These two cases are extremely rare, however, and would only occur during wintertime in case of bad weather. Competition is fierce during the warmer months: it is not unusual to count up to two hundred individuals vying for the ten highly-prized permits. Review the website for changes to this process - a BLM proposal to alter the lottery system was defeated in 2016. Another one will likely be on the table at some point.


If you’ve been lucky enough to obtain a walk-in permit, you may not participate in the drawing for another two weeks. Walk-in permits cost around $7 per person at the time of writing this.

Do not attempt to go to The Wave without a permit. Access is patrolled daily by volunteers and a Backcountry Ranger. If you get caught, you’ll have to pay a very hefty fine and face possible prosecution.
Don’t despair if you were unable to obtain a permit, Coyote Buttes North’s immediate vicinity has much more to offer than simply the Wave, as you will find out in this guide. Although the Wirepass Trailhead for the Coyote Buttes North is located in Utah, most of the Coyote Buttes Wilderness, including the Wave proper, is in Arizona. Note that Arizona doesn’t observe Daylight Savings Time so if you come from Kanab, there will be a 1-hour difference with Page. To make this worse, the area east and south of Page is Navajo Nation land, where DST is observed. If you are meeting someone at the House Rock Valley Road Trailhead, always specify whether it will be Utah or Arizona time.

If the clay-based road is wet it becomes impassable even to 4WD vehicles. When dry take House Rock Road for 8.4 miles to the Wirepass parking area on the right. You can dry camp at the Wirepass trailhead, and a toilet is present. The Stateline Campground is one mile further south and has better facilities and pit toilets There are some incredible prominent sites located around the Coyote Buttes North, including Old Paria, Cobra Arch, Paria Canyon (the northern section up to the confluence with Buckskin Gulch), Wire Pass & Buckskin Gulch, and Edmaier’s Secret. You’ll want to explore them all. It is easier to obtain permits in winter months (December, January and early February), especially through the walk-in process. Permits are hard to get around the Christmas and New Year so avoid these times. There may be snow on the ground during these months which makes hiking more difficult and photographing the patterns in the red rock problematic. If there is snow you may only be able to shoot southern exposures (eg The Boneyard and Sand Cove).

Spring is a good time to visit, especially April and May when temperatures are moderate and cloud cover is low. However this means getting a permit is more difficult.

I used to believe these were the worst months to go to The Wave. I now believe they are reasonably good, if you are prepared and can stand the heat. June is best for The Wave if you don't mind the heat. Cloud cover is low as is precipitation and it is usually the best month for night photography as the Milky Way stretches across the sky.
Average daily highs at the Wave reach 101 ºF in July and there is little shade. If you go in July go early in the morning when temperatures and cloud cover are lower, or mid to late afternoon. If you plan to stay the whole day you will need to find shade. Go prepared with ample water and consider something to create your own shade, such as a space blanket.

Thunderstorms and hail are common at this time of year. Permits, though still difficult, are easier to get than during the peak months.

Autumn months are the best for a visit. It is less crowded in general and cloud cover and temperatures are more workable, however this means that permits are very difficult to get. The rest of the Southwest is also stunning at this time of year. You’ll be able to catch the colourful Aspens in late September/early October, and the Cottonwoods in late October.