Top places to photograph in Lyon in 2022

These are the very best Lyon Instagram spots, curated by the PhotoHound team. If you've got limited time here, these are the must-see locations to shoot while you're in Lyon! 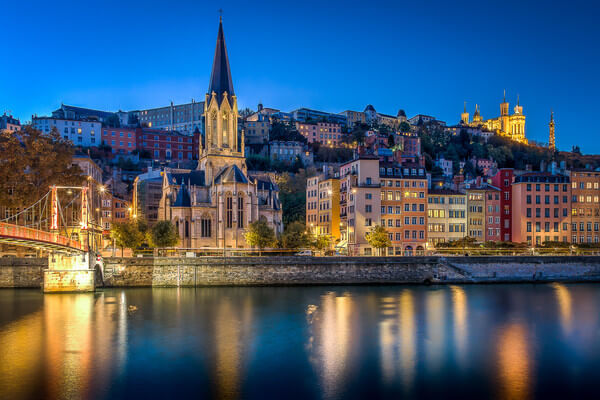 This is one of the most iconic point of view of Lyon with view to the St-Georges district and the best background with the Fourviere Basilica.
The spot is located on the left banks of the quays of the Saone at the level of the St-Georges Footbridge.
In addition, it’s easy to do take big enlargements of the Basilica of Fourviere from the docks with the large telephoto (For that, take a big tripod).
This spot is my favorite spot in Lyon.
Learn more about St-Georges district at Lyon 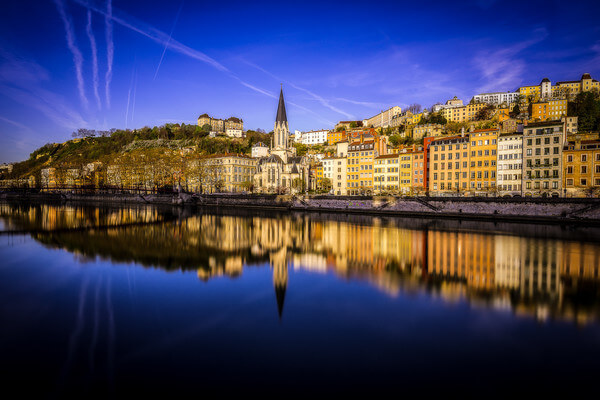 The Saone view from the Bonaparte bridge

It is possible to photograph the bridge at 360 °, to the district St-Georges, to the district of Croix-Rousse and of course to the hill of Fourviere.
These unique points of view are very beautiful and allow to leave part to your imagination. In addition, this spot is one of the few places in Lyon to take sunsets in Lyon (on the Saone, see the district St-Georges).
This is one of the most beautiful views of the St-Georges district. It allows to make long exposures on the church St-Georges with in the background the basikique of Fourviere. It is also possible with a big zoom to make plans on the basilica of Fourviere and the Parc des Hauteurs.
The early morning also allows us to make buildings reflections on the Saone.

Learn more about The Saone view from the Bonaparte bridge 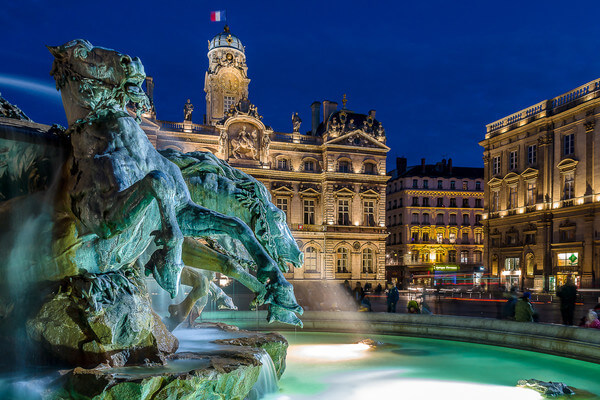 The square ofTerreaux is a place located in the 1st arrondissement of Lyon, on the peninsula between the Rhone and Saone, at the foot of the Croix-Rousse hill. It’s on the Rhone side of this square that the city hall of Lyon is located.
Similarly, in the center of the square, opposite the town hall, the ediles inaugurate September 22, 1892 an allegorical fountain of the Garonne made by Bartholdi. Commissioned initially by the Bordeaux City Council in 1857, the carved group called "Char triomphal de la Garonne" represented the Garonne and its four tributaries flowing into the ocean, the whole being symbolized by a woman leading a quadriga. Following the Exposition Universelle of 1889, the monument, which had become too expensive for Bordeaux, was bought in 1890 by the mayor of Lyon, Antoine Gailleton.
This fountain has become the same type as the Basilica of Fourvière or Hotel Dieu, a symbol of the city of Lyon. It was renovated between 2016 and 2018 and returned to water in March 2018. 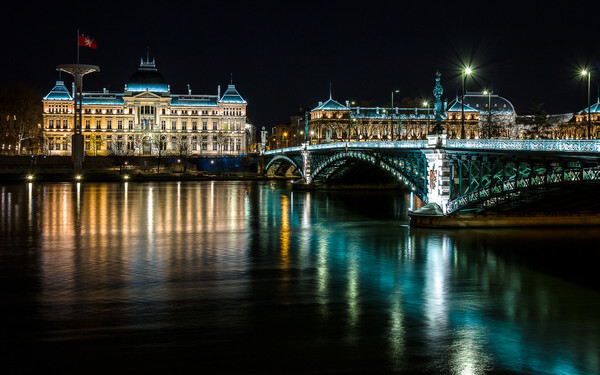 University bridge on the Rhone

It’s also my best spot. I like the University bridge and the Universities dehind during the blue Hour at the evening.
The University Bridge was built on the site of an old ferry to serve the university buildings erected between 1876 and 1898. When it was inaugurated in 1903, the bridge was named Pont des Facultés, but was quickly renamed University Bridge. Damaged in 1944, the bridge was finally reopened in 1947. The bridge, 267,50 m long and 20 m wide, consists of three metal arches melted at Longwy and resting on stone piles of Porcieu-Amblagnieu.
The Lumière-Lyon-II University, located on the Claude Bernard platform in Lyon, is one of the three universities resulting from the division of the University of Lyon following the 1968 Edgar Faure law.
It trains some 27,393 students in the fields of human sciences, law and finance. The motto, inscribed in golden letters in the shadow of Claude Bernard's statue in the main entrance of the university is Scientia and Labore, which means "By knowledge and work".
Learn more about University bridge on the Rhone 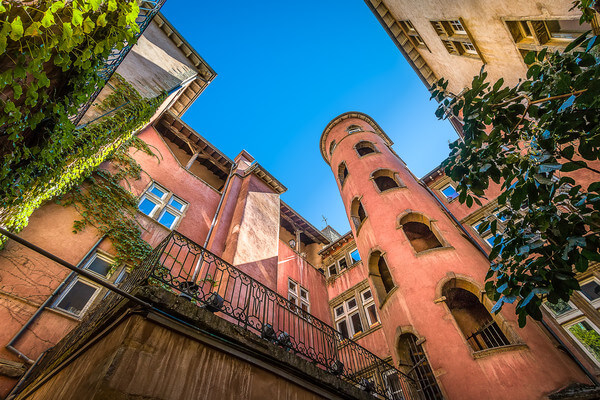 Pink tower in the Old Lyon

The traboule of the Pink Tower is one of the most remarkable traboules of the district, because of its ocher color, but also of the Tower which adorns it. The most famous resident of the place is none other than King Henri IV, who stayed there for a few days in 1600, during his wedding with Marie de Medici, celebrated less than 300 meters from the Tower, in the Saint Jean cathedral.
Learn more about Pink tower in the Old Lyon 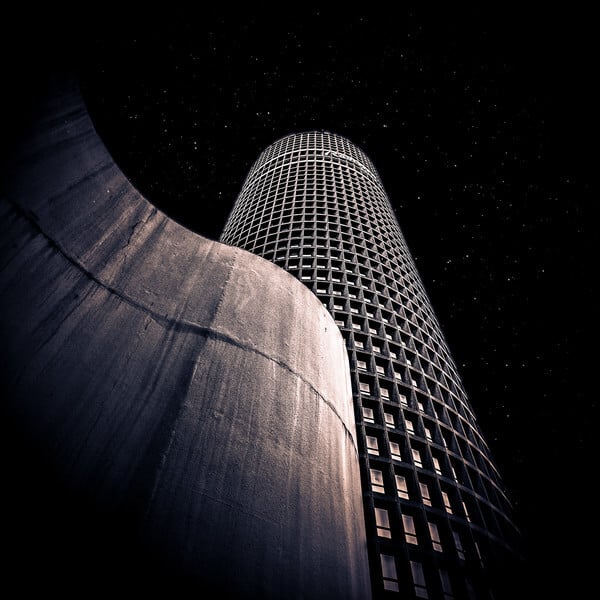 Part-Dieu is a district located in the 3rd arrondissement of the city of Lyon. Important multimodal hub, it’s considered the second city center of Lyon after the peninsula. Originally conceived as an alternative to the old city center, this district has become the central business district of the city and the first business district of France outside Île-de-France with 1,150,000 m2 of tertiary sector (net floor area) and 56,000 jobs. It is mainly composed of low-rise buildings and towers. It is the "nerve center" of the Lyon conurbation.
The Tour Part-Dieu (formerly Credit Tower of Lyon), nicknamed "the pencil", is an office skyscraper located at the Part-Dieu. Built between 1972 and 1977, the tower measures 164, 9 meters high. It's has become over time one of the symbols of the city of Lyon.
The Oxygen Tower is a 28-storey, 117-meter tall skyscraper. It is the third highest skyscraper in the city and was inaugurated on June 2, 2010.
The Incity Tower, nicknamed "the gum", is an office skyscraper located at the corner of rue Garibaldi and Cours Lafayette, it culminates at 202 meters high and is since 2016, the tallest skyscraper in Lyon, in front of the Part-Dieu tower and the Oxygène Tower, and the third tallest skyscraper in France behind the First Tower (La Défense) and the Montparnasse Tower (Paris). 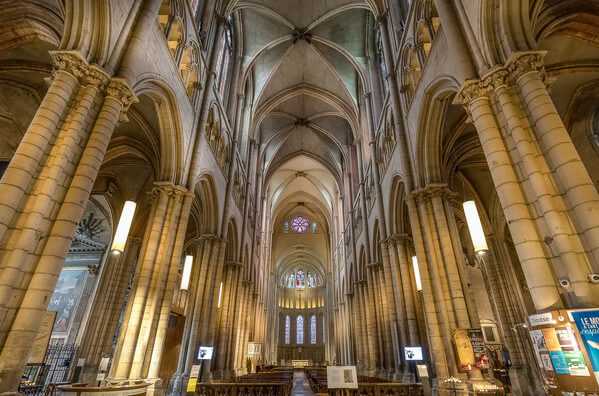 Interior of the cathedral St-Jean

The Saint-Jean-Baptiste-and-Saint-Etienne primatiale (also called, more simply, Saint-Jean cathedral) is the episcopal seat of the archdiocese of Lyon. It has the rank of cathedral and primatiale.
It’s located in the heart of the medieval and Renaissance district of Vieux Lyon, which is one of the highlights. In the Middle Ages, it was part of a complex of churches and other ecclesial buildings, the group cathedral, which included among others the churches Saint-Étienne and Sainte-Croix, destroyed at the Revolution, as well as the current manécanterie.
The primatiale is classified historical monument since 1862. In addition to this protection, it is integrated since May 12, 1964 in the first protected sector of France. Finally, on December 5, 1998, it was recognized as World Heritage because of its location in the historic site of Lyon.
It is also a popular tourist destination, for its location, for the special events that are organized, especially during the Festival of Lights, but also for its astronomical clock of the fourteenth century.
For all the photographer, a site of this cathedral is very beautiful, between there history, all the all feasible (and original) compositions.

Learn more about Interior of the cathedral St-Jean 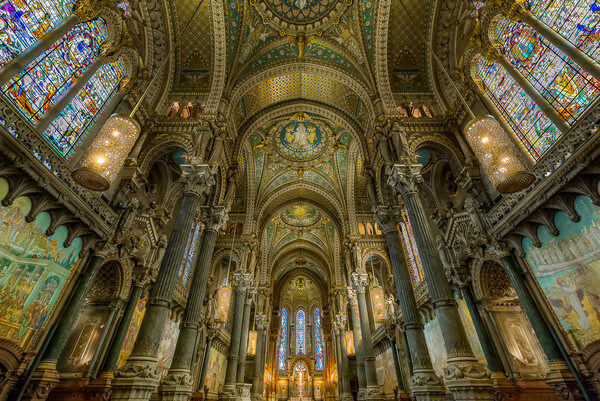 Interior of the basilica of Fourviere

Notre-Dame of Fourviere basilica overlooks the city of Lyon from the top of the Fourviere hill since the end of the nineteenth century.
It is built from the chapel of St. Thomas, place of devotion St. Thomas and the Blessed Virgin. Following a vow in 1642 to avoid an epidemic of plague in Lyon, an annual pilgrimage is formed. In the nineteenth century, a statue of Mary was erected on the raised and strengthened steeple of the chapel and the proposal to build a basilica is accepted, both to accommodate more and more visitors than to thank the protection of Lyon during the French war -prussian of 1870.
Its neo-Byzantine or Romanesque-Byzantine style architecture is the work of Pierre Bossan.
Remaining private property, the basilica obtained at the end of the twentieth century official recognition of its status as a monument to Lyon. The building is listed in the Supplementary Inventory of Historic Monuments on September 26, 1977; then it is recognized of public utility on October 15, 1998, just before its inscription with the world heritage on December 5 of the same year, under the Historic Site of Lyon. Finally, on March 25, 2014, it is classified as a historical monument.
The basilica is one of the most visible landmarks of the agglomeration, and one of the symbols of the city of Lyon. It gives Lyon its status as as "Marian city". About two million tourists are welcomed each year in the basilica. The basilical complex includes not only the edifice, the St. Thomas Chapel and the statue, but also the panoramic esplanade, the Rosary Garden and the Archbishopric of Lyon.
For all the photographer, a site of this basilica is very beautiful, between there history, all the all feasible (and original) compositions.

Learn more about Interior of the basilica of Fourviere 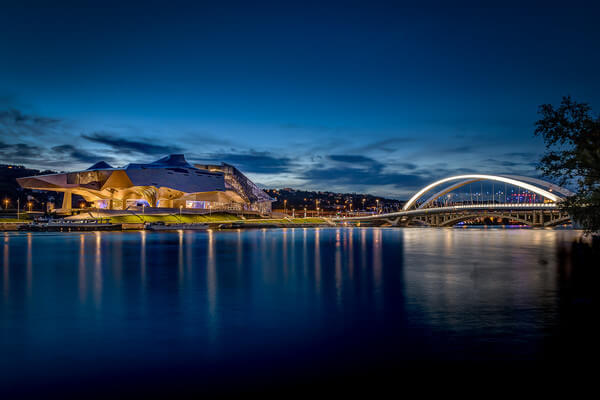 The spot is located on the bank of the Rhone opposite the museum of Confluences to have the beautifull reflections on the Rhone.
The museum of relations is a museum of natural history, anthropology, societies and civilizations located in Lyon, in the district of La Confluence, on the southern tip of the city 'island of Lyon, at the confluence of the Rhone and the Saone. Heir to the Museum of Natural History in Lyon, it is housed in a building architectural design architecture Coop Himmelb. 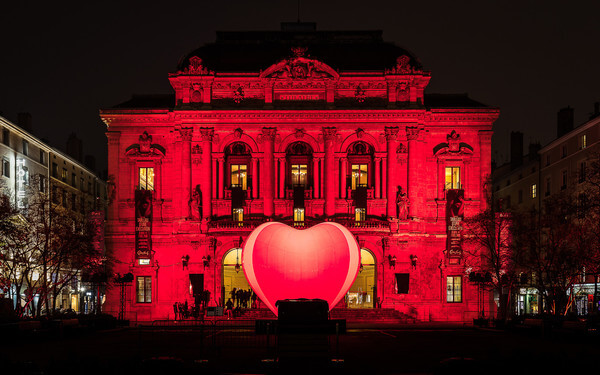 The spot is located on the square of Celestins where is place the beautiful theater of Celestins in the Bellecour district.
It is one of the only theaters in France, with the Comédie-Française and the Théâtre de l'Odéon, to celebrate more than 200 years of dramatic art.
Its name comes from the convent of the celestinians who occupy the seat from 1407 to 1789.
It is today a municipal theater in direct control City of Lyon. It programs a contemporary and classical repertoire and theater.

Learn more about The Celestins Theater

We hope you enjoy photographing these great Lyon Instagram locations. We love seeing your images of the most Instagrammable places in Lyon, so make sure to share your images on PhotoHound and tag us on Instagram @photohound and hashtag #photohound for a chance to be featured.