Top places to photograph in Naples & the Amalfi Coast in 2022 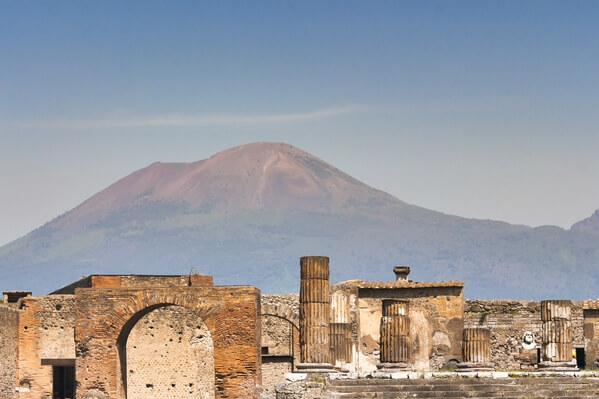 In AD79, Mount Vesuvius erupted, burying the surrounding area in metres of volcanic ash. Pompeii was an ancient Roman city that was famously engulfed. It is one of Europe's best known archaeological sites.
Learn more about Pompeii 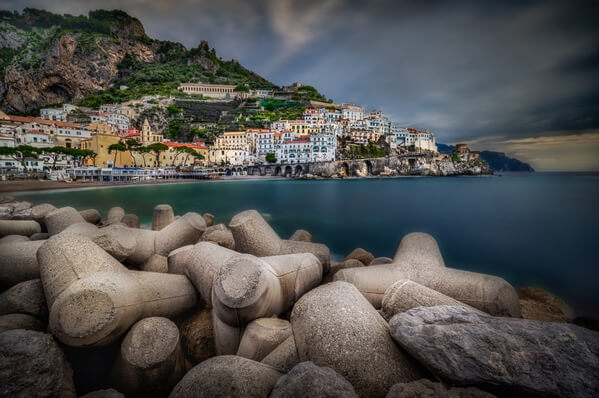 Amalfi - view from the Port Dock

Amalfi, a small town, on the Gulf of Salerno, is the main town of the famous Costiera Amalfitana (Amalfi Coast), and is one of the most popular tourist destinations together with nearby towns on the same coast. Its beauty granted the city and the whole coast line the status of UNESCO World Heritage Site.
Amalfi was the capital of the maritime republic , one of the most important trading powers between the IX and XII sentury in the Mediterranean sea.
It lies at the foot of Mount Cerreto, surrounded by dramatic cliffs and a wonderful coastal scenery. The town of

Learn more about Amalfi - view from the Port Dock 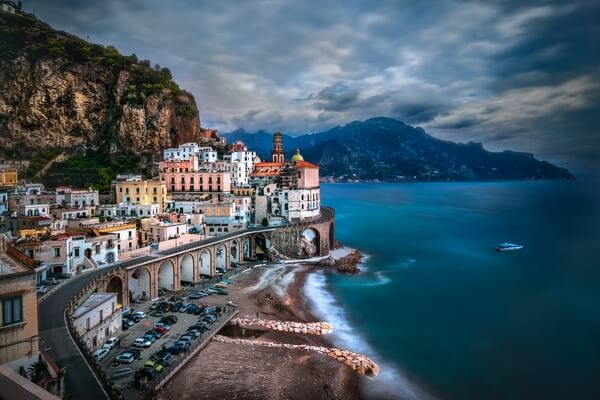 Once you are in Amalfi, even if for just one day, dedicate one or two hours to Atrani
It is a nice coastal fishing village with a population of less than 900 people. It is located along the valley of the river Dragone, named for a legend saying there once was a terrible dragon that would breathe fire and would hide himself there. The village lies in the divide of two steep cliffs on the shore of the Sea. Many coloured houses rise above a beautiful stretch of sand. It is one of the most idyllic and picturesque settings in Italy.

Though it is part of the Amalfi Coast, it is one of the few villages along the coast to preserve intact its antique, traditional characteristics


Learn more about Atrani - view from the Pedestrian Street 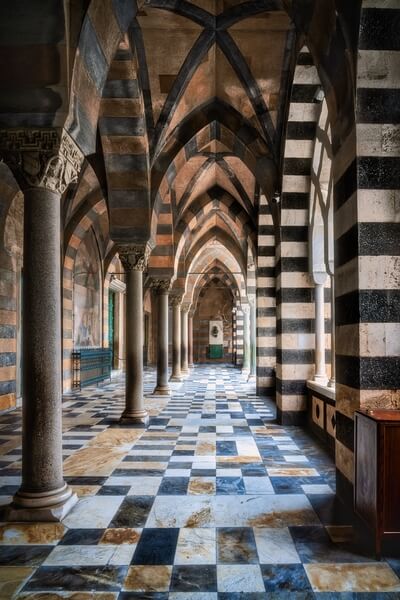 Saint Andrew Amalfi Cathedral, or, if you prefer, in Italian, Duomo di Amalfi, is a medieval Roman Catholic cathedral located in the Piazza del Duomo in Amalfi. The relics of the Apostle Saint Andrew are kept here.

Built in the IX century, it has an Arab-Norman Romanesque architectural style. Through the centuries it a has been added to and redecorated several times, with Gothic, Renaissance and Baroque elements.

The cathedral includes the adjoining 9th-century Basilica of the Crucifix. Leading from the basilica are steps into the Crypt of St. Andrew. 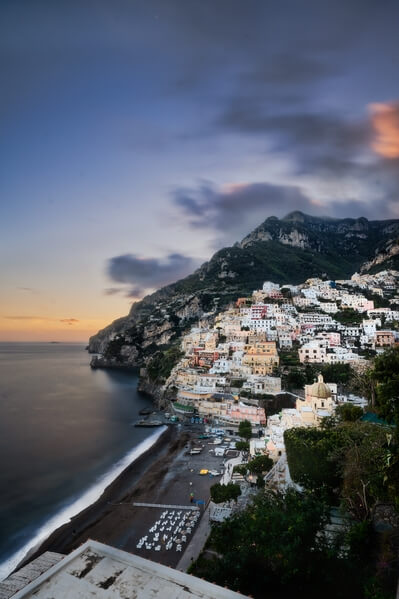 Positano, along with Amalfi and Sorrento, is the most popular town on the Amalfi Coast and is known worldwide for its timeless fashion, nightlife and characteristic shops.

The urban structure of Positano makes it one the most beautiful villages to be photographed: it’s made of terraces and of narrow streets and homes nestled into the hillside.

Learn more about Positano - view from the East 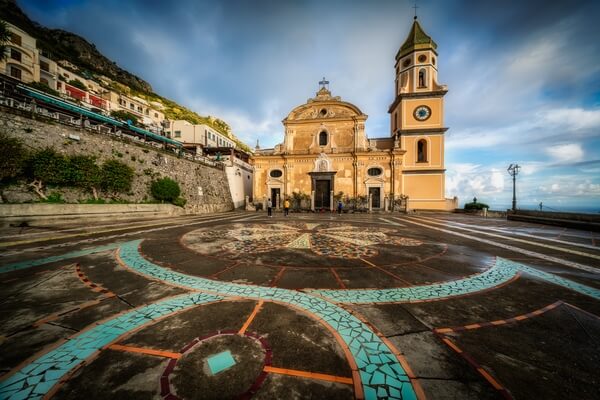 Praiano was once an ancient fishing village and the favourite retreat of Amalfitan rich people. Today is still an oasis of peace, tranquillity and colour.
This spot focus on the square and the Church of San Gennaro (Saint Januarius). The church was built in august 1589 on an existing structure dating back to 1200 and untill 1572 was the property of the Corsario family who were noblemen from Amalfi.
The Parish Church of Vettica Maggiore is dedicated to St Gennaro: the Neapolitan bishop of Benevento, who died martyr in Pozzuoli on September the 19th 305
The structure is flanked by a bell tower with a cupola covered in majolica tiles.
The square in front of the church is made of a beautiful composition of majolica.
Getting there
The SITA Bus stops in Praiano in Via Guglielmo Marconi. From the bus stop you immediately see the dome of the church. It’s only 150 meters away.

Learn more about Praiano - Church of Saint Januarius and Square 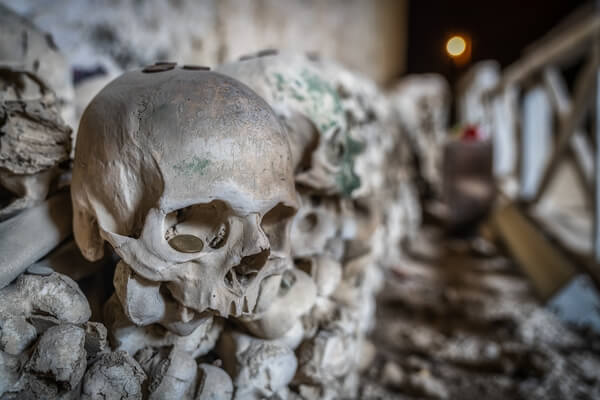 The Fontanelle Cemetery is an ex-ossuary that contains the remains of an unspecified number of people. It is located in “La Sanità” (or the Sanitation), one of the Naples's richest districts of history and tradition.

The cemetery is known because there was the ritual of the "souls", that is, the adoption and care by a Neapolitan of a certain skull of an abandoned soul in exchange for protection.Every corner, every corridor of the Fontanelle Cemetery is rich in history, anecdotes, legends, and curiosities waiting to be heard.
Learn more about The Fontanelle Cemetery 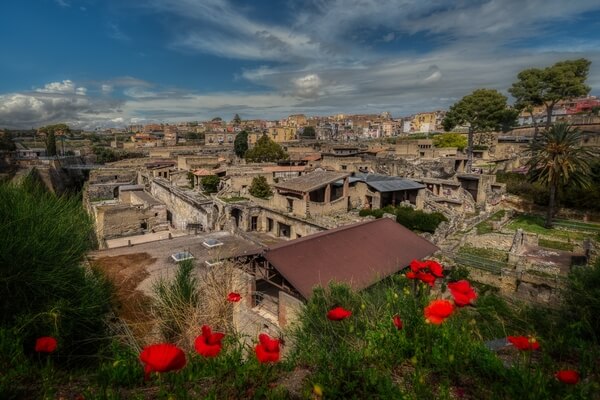 Like its neighbour Pompeii, Herculaneum is famous worldwide as one of the few ancient cities to be preserved nearly intact.. The thick layer of ash that blanketed the whole area protected the town against looting and the elements. Unlike Pompeii, the mainly pyroclastic material that covered Herculaneum carbonized and preserved more wood in objects such as roofs, beds, and doors, as well as other organic-based materials such as food and papyrus.
Smaller but wealthier than Pompeii, Herculaneum was a popular seaside retreat for the Roman elite, which is reflected in the extraordinary density of grand and luxurious houses with, for example, far more lavish use of coloured marble cladding.
Learn more about Herculaneum 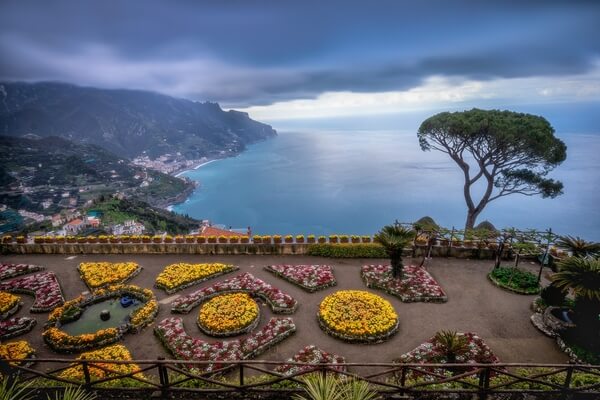 A villa belonging to the powerful Rufolo family and with strong architectural influences from the arabic world, Villa Rufolo, dates back to 1200. It’s one of the most important landmarks of Ravello and hosts on its terrace the Wagner Festival in July.
The garden of the Villa, known as the "Garden of the Soul", occupies two levels and is reached by following a tree-lined avenue with a distinctly Victorian air. The ancient walls, almost hidden by cypresses and lime trees, leads to the Moorish cloister.
Learn more about Ravello – Villa Rufolo