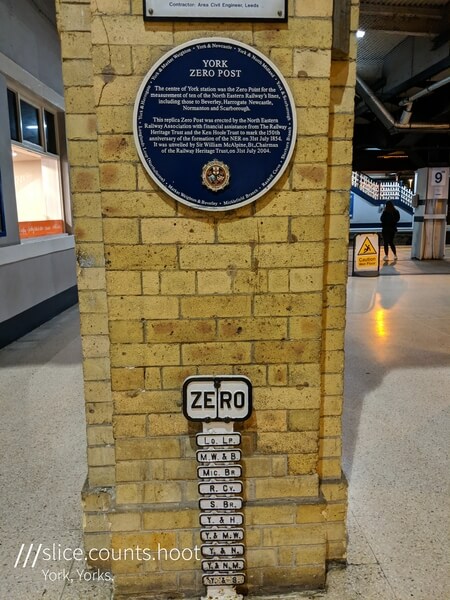 In 1905, the North Eastern Railway set out to systematically measure each one of its rail lines, as required by law. The cast-iron quarter-mile, half-mile, three-quarter-mile and mile posts that were erected can still be seen throughout the former NER area.

The measurement of each line started at a point where a cast-iron post bearing the word "Zero" was erected.

The exact centre of York station, on the present-day platform 5, was the zero point for ten lines, which meant the zero post bore ten identifying plates.

LO. LP. - Longlands Loop (down), from Longlands Junction, Northallerton, on the York and Newcastle, to the Leeds Northern line. Opened in 1901.

MIC. BR. - Micklefield Branch, from Church Fenton, on the York and North Midland line to the Leeds and Selby line at Micklefield. Opened in 1869.

S. BR. - Sherburn Branch, from Sherburn Junction on the York and North Midland line, to the Leeds and Selby line. Opened in 1839.

Y. & H. - York and Harrogate, from Poppleton Junction on the York and Newcastle line, to Harrogate. Opened in 1848.

Y. & S. - York and Scarborough, from Waterworks Junction, York, to Scarborough. Opened in 1845.

Although most of these were short connecting lines, the list demonstrates the importance of the NER.

It was formed in July, 1854, when it controlled several important main lines. By taking over other companies it created a near monopoly in the region.