Top places to photograph in The Yorkshire Dales in 2022 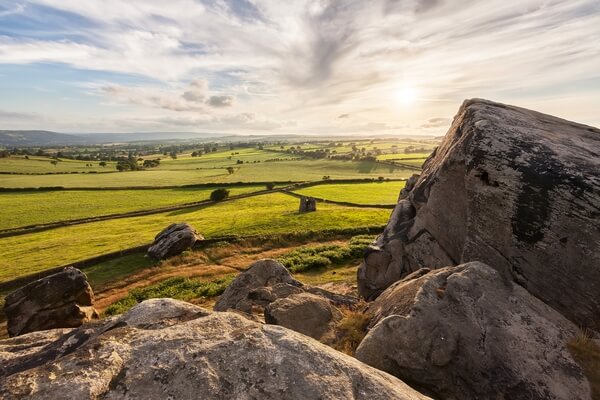 Almscliffe Crag is an outcrop of millstone grit that stands above an otherwise flat landscape, just south of the Dales, which makes it prominent and clearly visible for miles around. It's a popular location with climbers, families and photographers alike - so is often a very busy place, especially considering that the whole area is quite compact.
Learn more about Almscliffe Crag, Harrogate 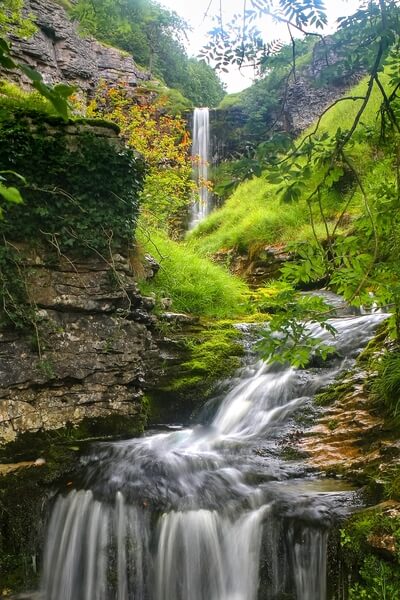 The path up the beck is actually one of the routes up to Buckden Pike, the largest hill in the area, but it's a challenging route with a number of scrambles up near-vertical cliffs if you're wanting to make it all the way up. Instead, just enjoy the more gentle terrain towards the bottom and only go up as far as you feel comfortable. There is a good path for most of the way, and the waterfalls extend both up and downstream from where you join it.
One of the highlights of this stream is that it's often crystal clear water, having been filtered by the limestone higher up, rather than the peat staining usually found in the dales.
Learn more about Buckden Beck, Wharfedale 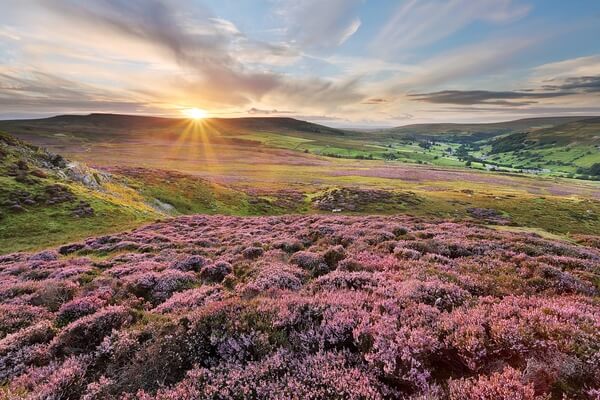 Calver Hill is the dominant hill above lower Swaledale, an imposing presence above the village of Reeth. If you have time to stop off in Reeth, then visiting the ice cream parlour in the south-western corner of the village green is certainly worth visiting. A friendly owner, the best brand of ice cream in the country and the best flavour (chocoholic Brymor ice cream). You can thank me once you've tried it!
Learn more about Calver Hill 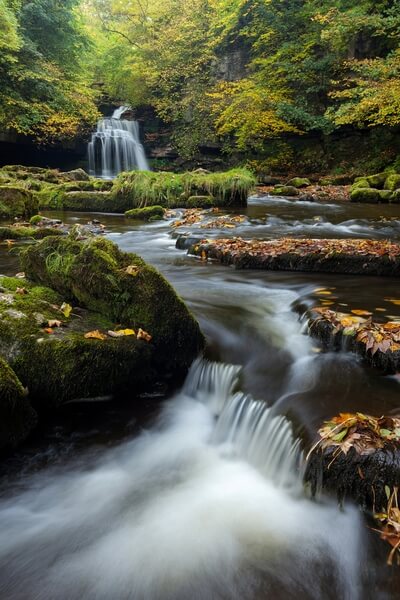 This is one of the most picturesque and most photographed waterfalls in the Yorkshire Dales, hardly the tallest or most powerful, but once you visit you'll soon see why it's so popular. With views from either side of the stream and beautiful foliage surrounding it, it's one not to be missed.
Learn more about Cauldron Force, West Burton

The view itself may not have changed much throughout the centuries, but the current remains of Crackpot Hall date to the mid 18th century, although a building is believed to have stood here for 200 years or more beforehand..
Learn more about Crackpot Hall & Keld 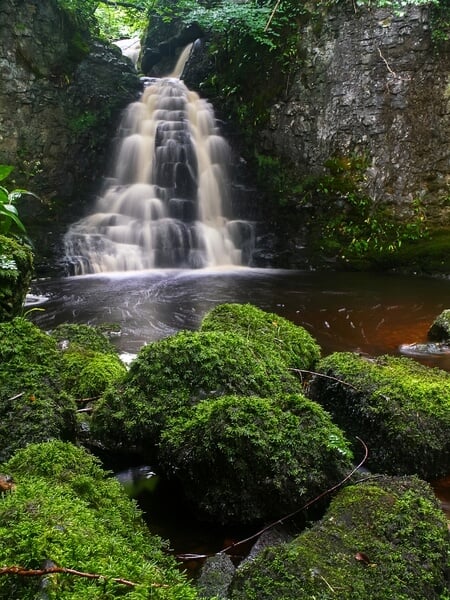 This is quite a well hidden waterfall and therefore not often photographed, it doesn't even have a name other than to be named after the stream it resides upon. In the summer the track leading up to it can get so overgrown that many will walk within metres of it and not even know it's there. Walking up from the Hubberholme direction, you'll also pass by a number of small waterfalls on Cray Gill, the main beck alongside the path - it's not easy to get good angles on many of them but are certainly beautiful just to see.
Learn more about Crook Gill Waterfall 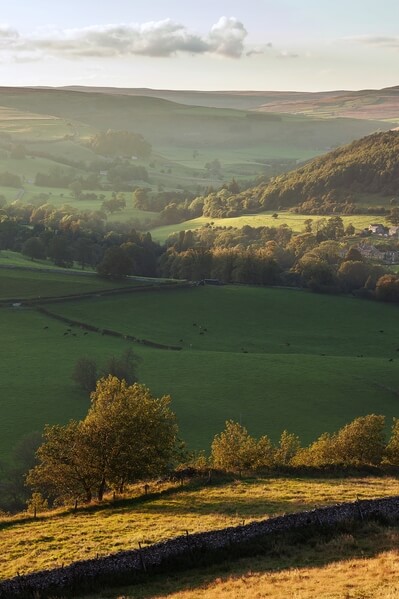 The views from this location are extensive in both directions - both up and down the valley. It's somewhat underexplored due to there not being any true right of way through the fields, but the path shows that plenty of people do wander this way and you should have no problems as long as you don't damage anything.
Learn more about Downholme View point

Being on the southern end of the Dales, more easily accessible from some of the major northern cities, it's no wonder such a towering natural feature draws the crowds. Malham cove was formed during the last ice age when glacial melt water flowed from the moorland above, now the location of Malham tarn and carved out the landscape via an enormous waterfall. Nowadays, the stream has sunk underground and re-emerges at the base of the cove. Only once in living memory (December 2015) has it rained enough for the waterfall to reappear - temporarily making it England's tallest waterfall (80m) by some way.
As well as viewing from the bottom, there's a well marked walk around the top of the cove too, with some of the best limestone pavements in the country and extensive views out over Malhamdale to the south.
Learn more about Malham Cove 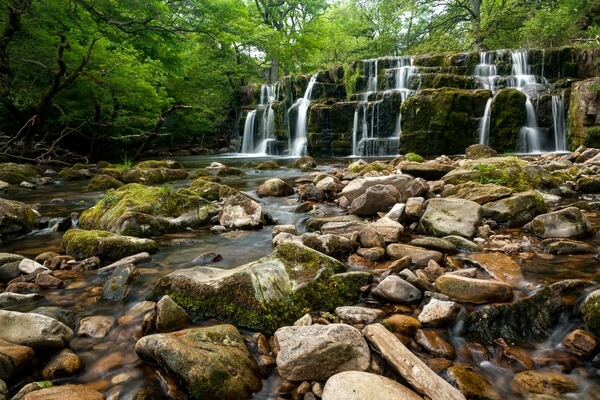 This is probably one of the Dales' least known waterfalls, but it's no less impressive than many of its more famous contemporaries. With it being on a lesser tributary to the river Swale, with only a small catchment area, the flow of water can vary hugely day to day, but is well worth visiting after a bit of rain.
Learn more about Orgate Force 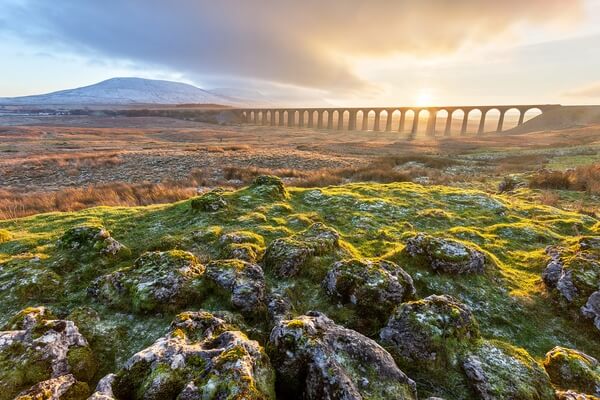 Completed in 1874, Ribblehead viaduct is one of the most prominent and well known structures in the Dales and stands out in the landscape from all around. You'll often find this location teeming with visitors, especially in the summer months, as it's so easily accessible and impressive to look at. It's difficult to put details in this guide as schedules change, but have a search on the internet for when steam trains might be passing over it if you want to add an extra level of interest to your shot.
Learn more about Ribblehead Viaduct, Ribblesdale