Explore the top spots in Patagonia

Top places to photograph in Patagonia in 2022

These are the very best Patagonia Instagram spots, curated by the PhotoHound team. If you've got limited time here, these are the must-see locations to shoot while you're in Patagonia! 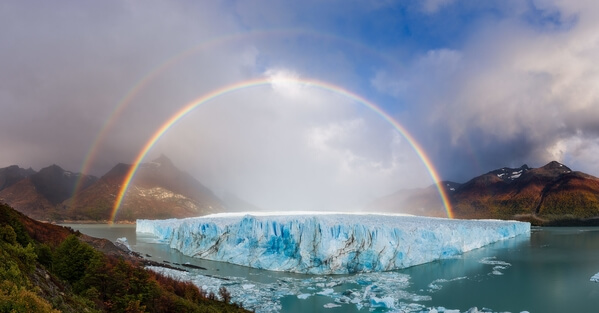 This outlet glacier of the Hielo Sur ice cap is one of the world’s largest glaciers and it has an immense presence. It is also one of only a handful of major glaciers on earth that are constantly advancing. From the moment you step out of your vehicle at the parking lot you can hear what sounds like a distant thunderstorm. The thunderous creaking and groaning are the sounds of several trillion tons of ice, moving over the earth a few paces per day. A favourite description of glaciers is that they are earth’s greatest paradox – one of the most powerful and destructive forces of energy and motion, frozen in near-total stasis. Perito Moreno is one of our planet’s greatest examples of this paradox. At the highest point, its face measures about 80m, or 25 stories high. From side to side, the face stretches an immense six kilometres. It is not only the photos that severely fail to do Perito Moreno’s size justice, but also seeing it in person. The immense scale only becomes evident when a large piece of ice calves off, falling to the water below in slow motion and absolute silence…then only a few seconds later, a deafening explosion fills the air and small waves ripple out from the point of impact. A while later, those ‘small’ waves crash into the shore below in a dramatic display of nature’s power. Only after seeing such an event do you fully realise the scale of this mountain of ice.
Learn more about Perito Moreno Glacier 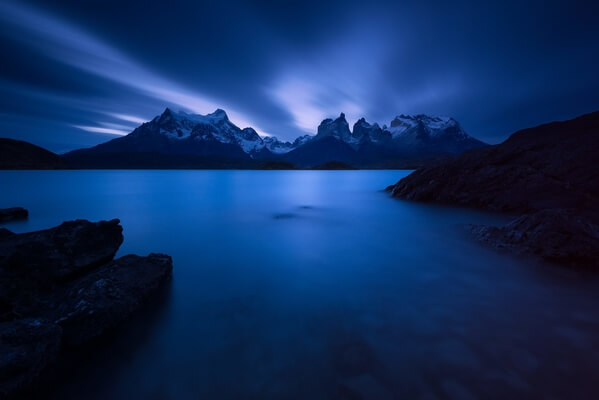 If translated from Spanish to English, the name of this park means Towers of Blue. This was the name given to the mountains due to the three granite monoliths visible from the East, which have a blue tone when viewed from far away. The most important thing to note about these mountains is that despite their close proximity to the Andes range, they are not related to the Andes. The Torres del Paine mountains were created by extrusive volcanism. This is when volcanic activity causes a massive ‘extrusion’ on the earth’s surface by releasing magma onto the landscape. The dramatic peaks of TdP were then carved out of the extrusion by glacial activity. The most significant evidence of this is the layer of black rock in the top of the Cuernos del Paine (Horns of Blue), which is the park’s most photographed subject. In comparison, the peaks of the Andes (like at El Chalten) are all just granite. Whether TdP is more photogenic than El Chalten can be debated to the ends of the earth, but there is a major difference between the two, touched on lightly earlier in the guide; TdP offers a vast variety of fantastic foregrounds within easy walking distance of a parking lot, whereas all the best locations at El Chalten involve lengthy hikes.


TdP has countless glacial lakes with an icy turquoise shimmer and interesting shorelines. There are waterfalls, rivers, floodplains and steppe rich with golden grass and Beech Forests. Any photographer could spend a month at TdP without getting bored. It is a large park with a lot to offer and thus it is broken down into many spots.
Learn more about Torres del Paine (TdP) General Info 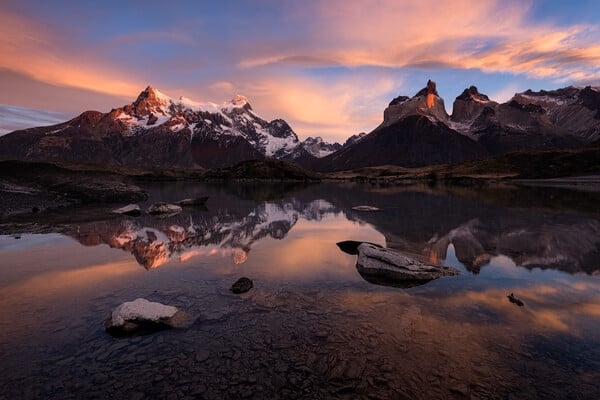 Lago Nordenskjold is a truly massive lake and straddles almost the entire southern base of the Cordillera del Paine. Its main inflow is near the Eastern gate of the park and it’s main outflow is Salto Grande, where it falls into Lago Pehoe. The shores of this lake probably hold limitless photographic potential, but to truly explore you’d need to go off-route on a backpacking adventure. Fortunately, Just walking another 10-30 minutes past Salto Grande will already reveal a fantastic diversity of foregrounds to compose under the mountains.

The rock shelf you’ll find at the GPS co-ordinates offers some really great lines and shapes to compose. You’ll also find that if there’s a slight breeze the water is much calmer near the rocks than in the open lake. Reflections are fantastic here.

If you walk another 5 minutes to the next bay, you’ll find a black pebble beach with a beautiful curve. As long as you keep walking, you’ll keep stumbling across fantastic foregrounds. The further you walk from Salto Grande, the more you’ll be going into virgin photographic territory. 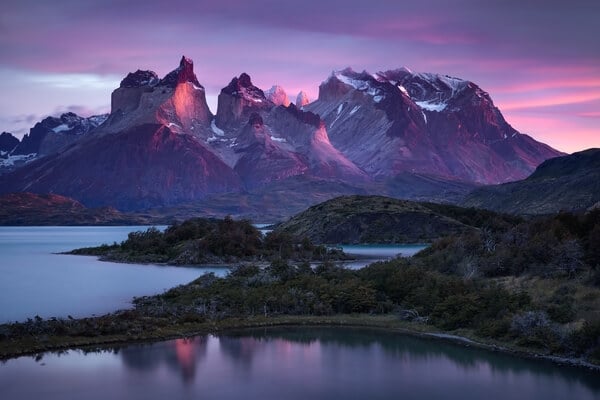 This is the easiest spot in Torres del Paine in terms of physicality. It’s right in front of the Explora Hotel and getting there just involves climbing some easy steps from a parking lot. You’ll have the peninsula (see previous spot) adding some interest to the foreground, with the greater shoreline winding it’s way towards the mountains in the background. If you want an easy and reliable foreground for a good sunrise/sunset, this is it.
Learn more about TdP - Explora Hotel View 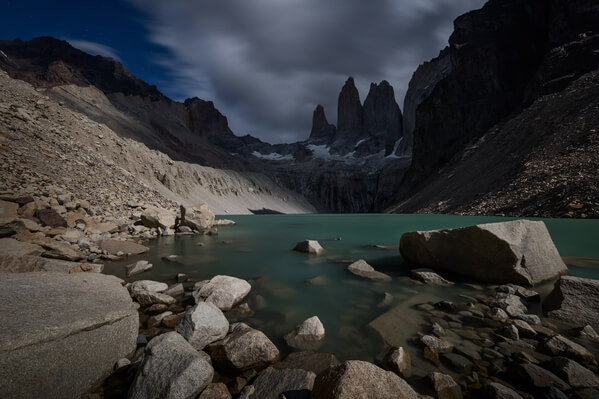 NOTE - This a very serious full day/18km hike that ascends and again descends about 900m. It should only be attempted by people in good health and fitness.

This lake below the famous three towers is TdP’s only iconic location that isn’t easily accessible. Expect a shimmering blue lake below one of the most spectacular mountainous landscape you’ll ever witness. If you want to shoot sunrise here you have to either camp at the lake (illegally) or start walking from Hotel Las Torres at about 4 in the morning.

It’s worth the effort - you’ll be at a glacial lake below three kilometer-high granite towers.
Learn more about TdP - Mirador Las Torres 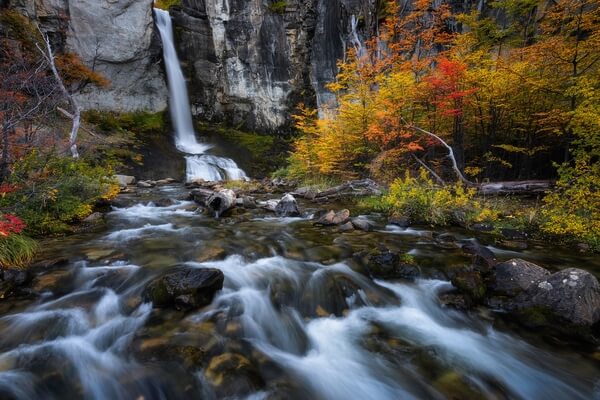 There are few waterfalls on our planet complemented by such a stunning bouquet of autumn foliage. During the first two weeks of April this scene is surrounded by everything from green and yellow to fiery oranges and reds. It is in a gorge that is well shielded from the wind, making it easy to freeze the foliage when doing exposures of 1-5s to get a silky waterfall/river.
Learn more about EC - Chorillo del Salto 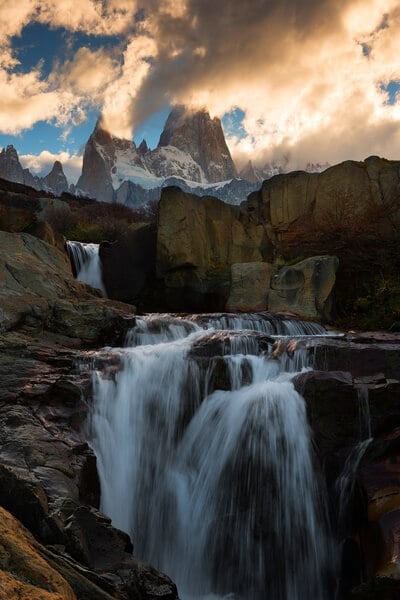 When I first visited Patagonia in 2013 this spot was still considered a bit of a secret. Nowadays it’s common knowledge - testament to the boom of photographers visiting this landscape paradise. It is a spectacular foreground for a portrait frame with Mt Fitz Roy and The Poincenot in the background. It can be captured at sunrise or sunset, but at sunset the exposure will not be easy as it’s right into the light.
Learn more about EC - The Secret Waterfall 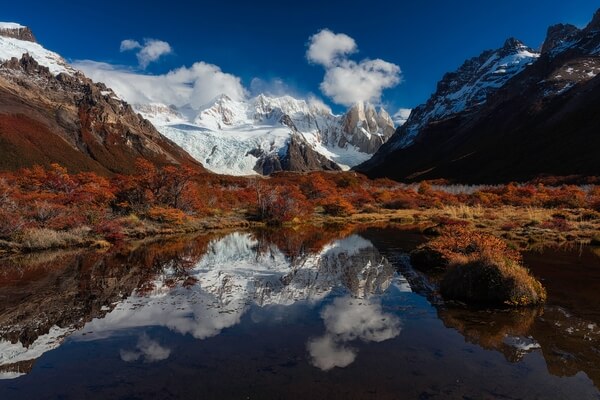 These pools are fantastic for reflection shots of the iconic peaks with some foliage in the frame. It offers something different to the stone and ice foreground of Lago Torre.

There is also fantastic autumn foliage all the way along this route that can be composed with the mountains in the background.
Learn more about EC - Cerro Torre Reflection 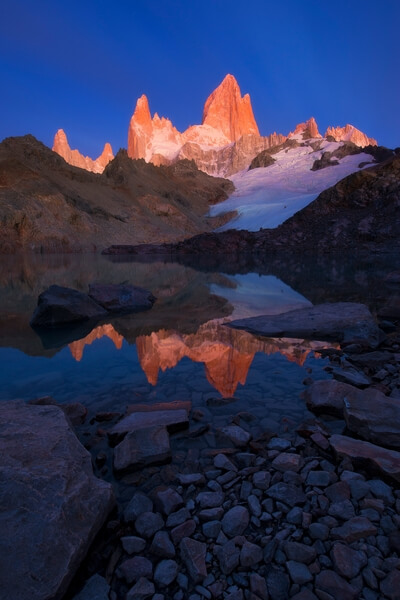 This is another location that will absolutely blow your mind, but it demands a fair bit of physical effort to get to. Lago de los Tres is a glacial lake situated near the base of Mt Fitz Roy and the Poincenot. It is best photographed at sunrise on a windstill morning to get a reflection of the mountains.

The hike to Lago de los Tres is a lot more challenging than the one to Lago Torre. It starts out more physically demanding and the toughest part is the last hour. I would not recommend doing this as a day hike unless you are absolutely confident in your abilities to reach it and return in the same day. My first recommendation is definitely to spend a night or more at Camp Poincenot. There is a designated camping area in the forest below the lake with a rustic toilet and lots of level areas to pitch a tent. You can spend one, two or even more nights here. The beauty of this destination is that in April the camping sites are mostly deserted, so you can chop and change your plans as much as you want. If you don’t own hiking gear or you don’t want to lug yours all the way to Patagonia, you can rent everything you need in town. There are several hiking stores that sell and rent everything from stoves to sleeping bags. You can also get a porter in town to carry your gear for you at a fair fee.
Learn more about EC - Lago de los Tres

We hope you enjoy photographing these great Patagonia Instagram locations. We love seeing your images of the most Instagrammable places in Patagonia, so make sure to share your images on PhotoHound and tag us on Instagram @photohound and hashtag #photohound for a chance to be featured.