These are the very best Oregon Coast Instagram spots, curated by the PhotoHound team. If you've got limited time here, these are the must-see locations to shoot while you're in Oregon Coast! 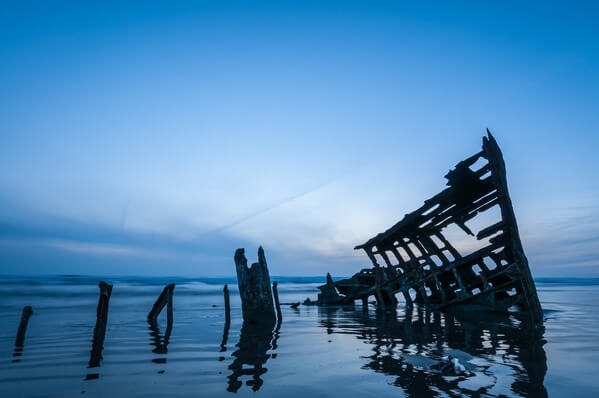 Fort Stevens State Park is the site of a military base that defended the Columbia River from the Civil War until the end of World War II. In addition to a museum and concrete bunkers and gun emplacements, the park is a popular recreation area and campground. For photographers, the main interest is the remains of the Peter Iredale, a ship that ran aground here in 1906. 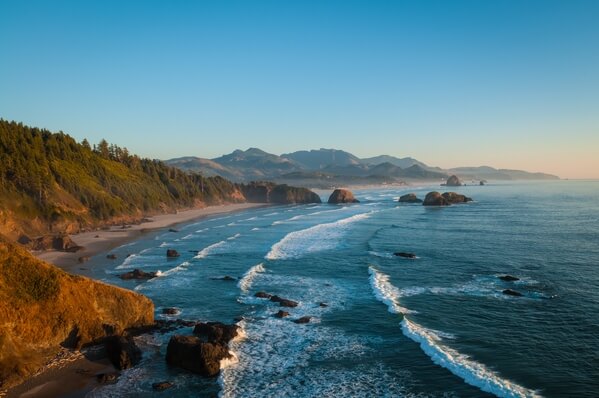 The view from Ecola Point is one of the iconic landscape images of Oregon. Indian Beach is a beautiful sandy cove with sea stacks at the southern end. A hike on the Oregon Coast Trail will take you up to Tillamook Head, where William Clark and men of the Corps of Discovery got their first look at the Pacific Ocean. 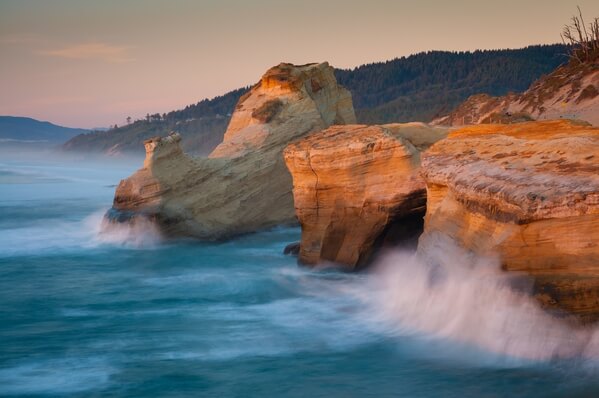 Cape Kiwanda and the beach at Pacific City are unique among locations on the Oregon coast for several reasons. First, unlike the volcanic rock that forms most headlands on the coast, Cape Kiwanda is largely sandstone. As typical of that soft rock, water and wind erode the bluffs into pleasing formations. Second, Haystack Rock, a volcanic remnant, juts out of the ocean but is the sole sea stack in this stretch of coast. The similarly named Haystack Rock in Cannon Beach is better known, but this one is bigger and is one of the largest monoliths in the world. And third, there is an active fishing fleet based in Pacific City and because there is no safe harbor, the fishermen use small, flat-bottomed dories and launch them right from the beach. 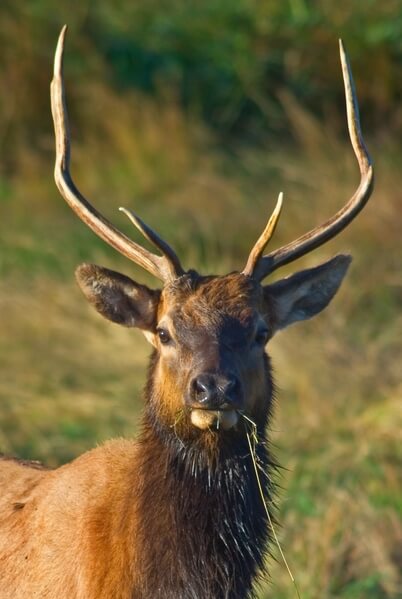 A herd of about 100 Roosevelt elk inhabit the pastures in this Bureau of Land Management wildlife preserve. Roosevelt elk are the largest species of elk in North America, and are found only in the Pacific Northwest from the western slopes of the Cascades to the coast. 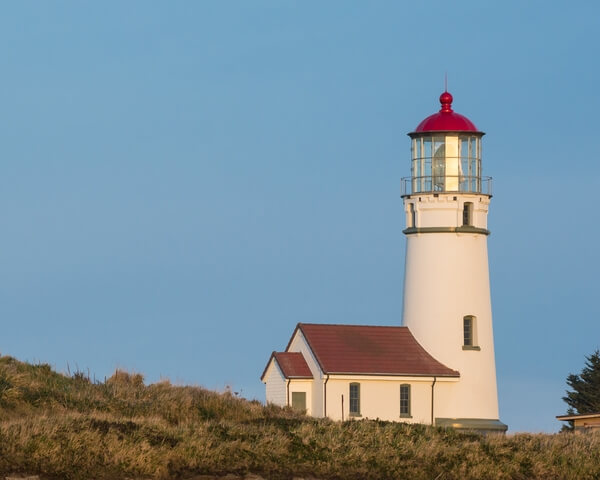 Cape Blanco is Oregon’s westernmost tip. The state park features year-round camping, a historic ranch house, and Cape Blanco Lighthouse, the oldest standing lighthouse on the Oregon coast. Dating from 1870, the lighthouse is perched 245 feet above the ocean, and still radiates its signal light from large Fresnel lens. 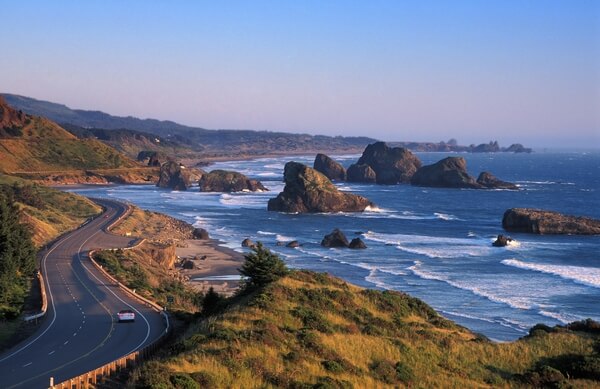 Cape Sebastian is a large, forested headland with easily accessible viewpoints and a rugged section of the Oregon Coast Trail. On clear days, the vistas from two established viewpoints can extend north for 43 miles to Humbug Mountain and south for almost 50 miles to the Point St. George Lighthouse at Crescent City, California. A 1.5-mile trail leads from the south parking area to the cliffs at the edge of the cape.

South of the cape, a sandy beach with offshore sea stacks stretches for 2.5 miles to the Pistol River, then continues another 1.5 miles to Crook Point.
Learn more about Cape Sebastian and Pistol River 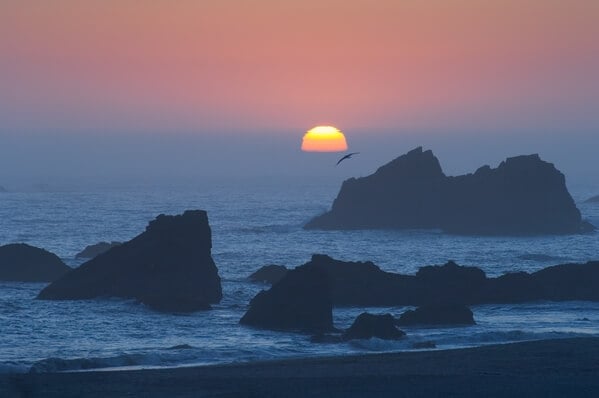 Harris Beach State Park is one of the favorite locations on the Oregon coast for landscape and nature photographers. It has a great combination of sandy beach, sea stacks and tide pools. The campground is very popular and has all the usual Oregon State Parks amenities, including hot showers and full hookups for RVs. 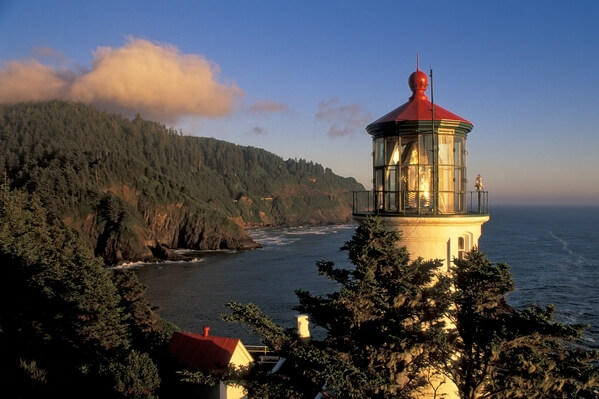 Heceta Head Lighthouse is one of the most photographed lighthouses in the world. The tower itself is very photogenic, and the setting is spectacular. It is one of the few lighthouses where the original Fresnel lens beam hasn’t been replaced by small but intense modern lights, and has been a signal to ships and fishing boats since 1894. Heceta Head (pronounced “Heh-SEE-tah” by most, “HECK-ah-tah” by others) is a 1,000-foot high promontory jutting out into the ocean. The lighthouse sits on a forested slope 200 feet above a cove with a lovely sandy beach. 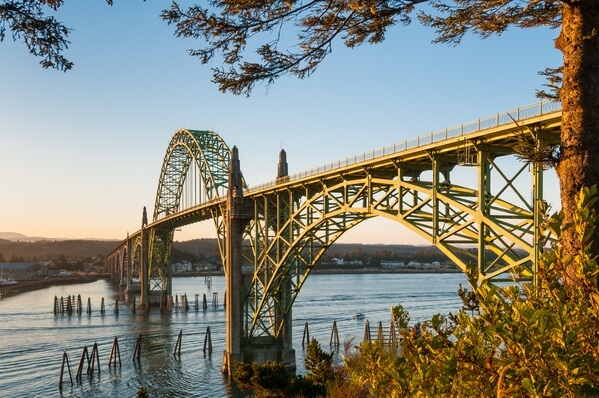 This magnificent bridge, which is listed on the National Register of Historic Places, is one of the icons of the Oregon Coast. First opened for traffic in 1936, it is the most famous of the dozen coast bridges designed by the renowned bridge engineer Conde B. McCullough. 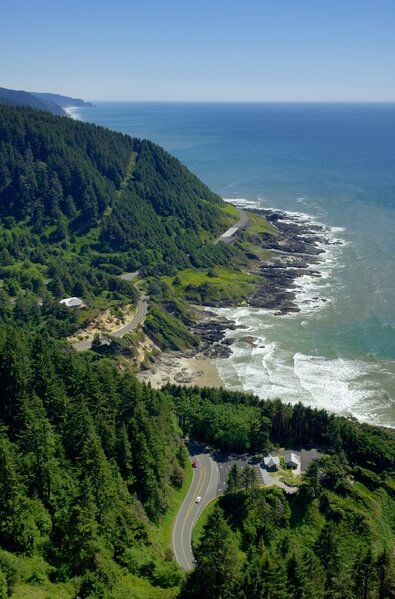 Cape Perpetua (per-PET-choo-uh) was named by English explorer Captain James Cook during his voyage along the Oregon coast. A lookout at the top of the cape is the highest point on the coast accessible by car, with a panorama view that extends, on a clear day, nearly 30 miles down the coast and out to sea. The view to the east takes in the dense temperate rainforest of the Coast Range.