Top places to photograph in North Cascades in 2022 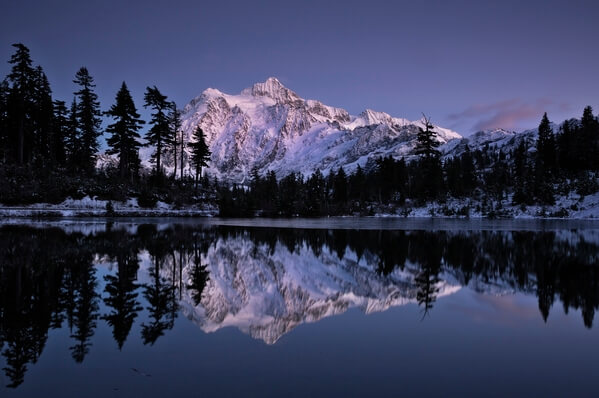 Lakes Highwood and Picture are located on an open benchland, dotted with subalpine trees and meadows. Both lakes have views and often reflect the glaciers and cliffs of the rugged looking Mount Shuksan. The scene including a lake, the mountains and the reflection is considered to be the most iconic images of what the alpine world should look like. Park along the northwest side of Picture Lake. Avoid parking at the east end of the lake or your car may end up in your picture. Follow the lakeshore trail to the west end of Picture Lake where a platform is perfectly situated for photographers to capture Mount Shuksan and its reflection. When the platform is too crowded, head over to the smaller Highwood Lake to find your location. 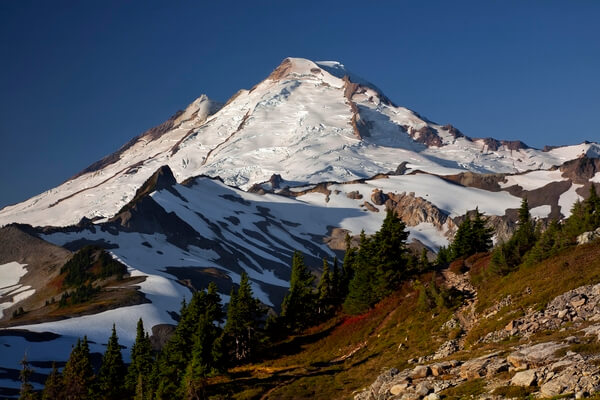 A short, steep hike leads to small ponds and tarns along the way to top of Table Mountain. Views from the summit include Mount Baker, Mount Shuksan as well as a host of lesser peaks such as Goat Mountain, Yellow Aster Butte and the American Border Peaks. The trail ends in rocks at the Table Mountain summit.
Learn more about Table Mountain 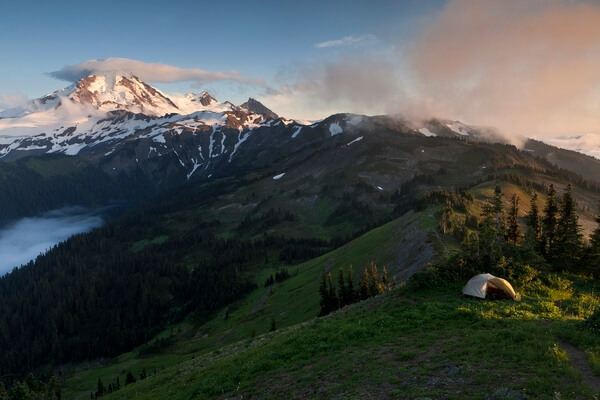 Superlatives fail when trying to describe the meadows and views of Mount Baker from Skyline Ridge. Wildflowers cover the meadows during the summer months and the fall color can be breathtaking by mid-September. Mount Baker is not the only mountain to be viewed from this trail, Mount Shuksan, Church Mountain and the Border Peaks also put in an appearance. Further out the Strait of Georgia shines and the mountains of Vancouver Island and the Coast Range of British Columbia are visible.
The hike length varies from 6 to 10 miles depending how far you want to go. The trail begins with a 2-mile climb which ends in a ridgetop meadow. Head up a grassy knoll for the first panoramic looks at the area. Continue on for a generous ½ mile then go left up a 6215-foot knoll for the widest views. For Mount Baker, continue on another ¾ mile, descending then climbing around Skyline Divide.
Learn more about Skyline Divide 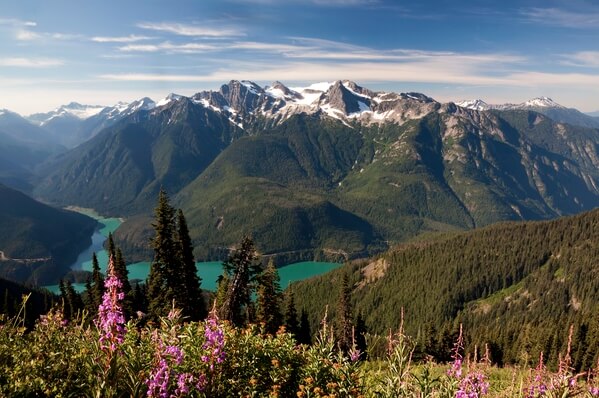 Sourdough Mountain has views of Colonial, Pyramid and Pinnacle Peaks as well as Davis Peak, Jack and Ruby Mountains and the southern Pickets. After a steep first 3 miles, the trail, which gains over 5000 feet on its 6.2 -mile climb, relents a bit as it enters wildflower covered meadows. Passing a campsite at 4.5 miles and the only water along the entire hike, the views expand over Diablo Lake. At the summit is an old fire lookout. (This is one of the oldest lookout sites in the country – the first lookout was built in 1917. The current building was constructed in 1933 and fixed up in 1999.)
Learn more about Sourdough Mountain Lookout 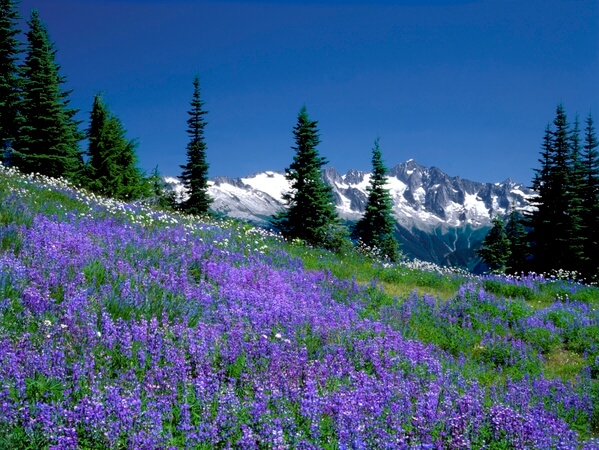 Lookout Mountain Lookout stands on a tower in a wildflower covered meadow near the summit of Lookout Mountain and commands a sweeping view over a broad swath of the North Cascades. The distance to the lookout and back again is 8.5 miles with a breathtaking 4500-foot elevation gain. This area is not as crowded as the easier to reach Hidden Lake Peaks or Cascade Pass. (Monogram Lake, the alternative destination, offers a very photogenic view up the Cascade River valley before the trail ends in the forested lake basin).
Learn more about Lookout Mountain 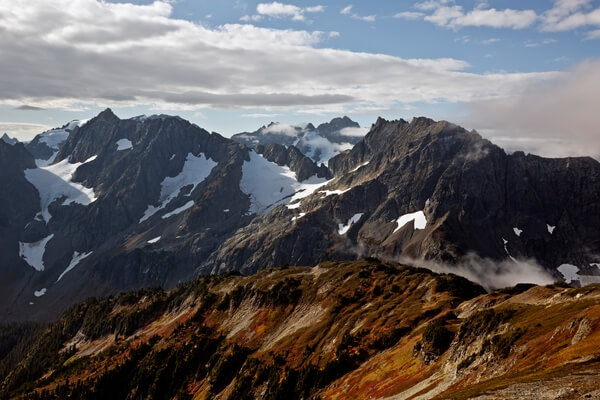 This is a “show case” location for the North Cascades National Park. The views start in the scenic parking lot which is dominated by the massive Johannesburg Mountain. On warm days there are frequent ice falls from the glaciers which are barely connected to the sheer cliffs. But this is only the start of the views. A wide, well graded, 3.7-mile trail climbs from the parking lot through forest to alpine meadows framed by snow and ice covered peaks. However, the best views are not found at the pass. For the shortest distance to better views, go right and head south up a steep climber's trail to Mixup and Magic Mountains. It is also the start of the renowned Ptarmigan Traverse. The best views are found to the north of the pass on Sahale Arm, reached by descending briefly before going left to climb across an open hillside to more meadows on the ridge crest. A mile from Cascades Pass, a side trail branches right, descending to Doubtful Lake. An excellent view of the lake can be found by continuing 0.2 mile up the Sahale Arm trail. Continue on another 0.5 mile to find a small tarn on the left (may be dry by late summer). The tarn is an ideal location for views. Two miles from Cascade Pass, the trail ends at the Sahale Glacier. In late-summer several tarns, perfect for reflections can be found in the talus to the east of the small camping area.
Learn more about Cascade Pass and Sahale Arm 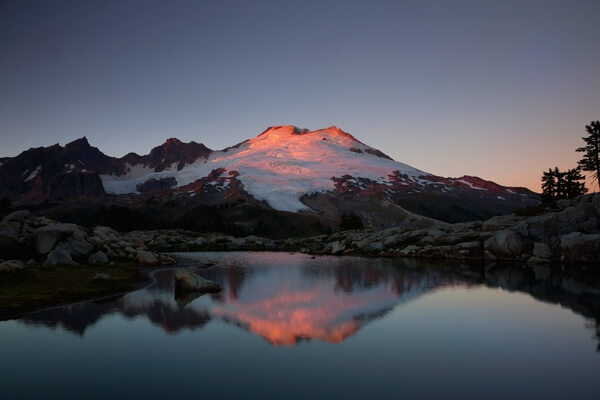 The trail to Park Butte Lookout is a moderately steep and occasional rough 7-mile round trip. It starts with a fairly level crossing of Schriebers Meadow then climbs to reach Rocky Creek at 1 mile. This can be a tricky crossing in late July and early August when the water splashes over the log and plank bridge. The trail then climbs for another mile to Lower Morovitz Meadow where the Scott Paul trail branches off to the right. Continue left to Upper Morovitz Meadow and expanding views of Mount Baker. At 2.4 miles the Railroad Grade trail, mostly used by climbers, heads off to the right. The main trail stays left, climbing to an open meadow spotted with several small lakes. If you reach this point before 1:00 pm, continue up to the lookout before heading down to photograph Mount Baker reflecting in the water.
Learn more about Park Butte 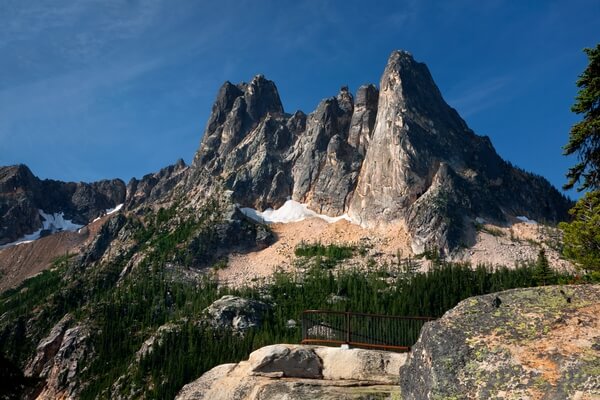 The Washington Pass Overlook is one of the few areas in the North Cascades where the truly large views are located only a few feet from the car. Walk out on the short, paved, trail to viewing areas perched on rocky cliffs directly above the only switchback on Highway 20. Mountains, spires, cliffs and ridges soar above creating a dramatic backdrop for the road below.
A second location can be found along the road when returning to Highway 20. Park in the last dirt pullout on the right side of the access road and walk into the forest. Following a maze of trails, head northeast to reach a damp meadow with a view of Liberty Bell.
Learn more about Washington Pass Overlook